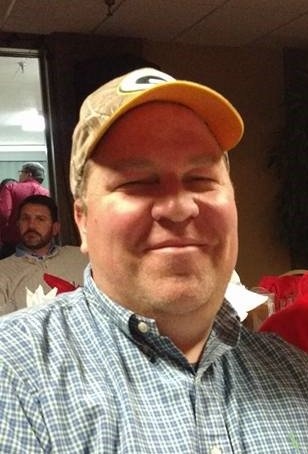 Jeff Kozlovsky, 47, died on Thursday, October 28, 2021, with his family by his side. He was born on November 9, 1973, in West Bend, the son of Francis and Susan (Ruemler) Kozlovsky Sr. Jeff was a gentle, kind hearted, caring, and compassionate man, who would do anything for anyone.  He had a strong love for his family, and truly enjoyed spending time with them and making people laugh. He enjoyed fishing, NASCAR, the Badgers, and Packers.  Jeff loved watching his brothers-in-law and nephew play hockey as well.  His phrase “Get in your cage smokey” could be heard during a hockey game when a penalty was called.  Jeff worked as an installer and salesman for Toys for Trucks for many years.  The past 2 years, Jeff was employed as a service writer for Plach Automotive in New London.  Jeff always said he had 9 lives, due to the countless things he endured, most notably his bypass surgery and double organ transplant. He was united in marriage to the love of his life, Jodi Fechter, on December 30, 1995, at St. Bernard’s Catholic Church, Appleton. They were high school sweet hearts of Appleton West High School.

Jeff was preceded in death by his parents; an infant brother: Michael Kozlovsky; and his father- and mother-in-law: Frank and Kathy Fechter.

Funeral services will be at Noon, on Sunday, November 7, 2021, at the Wichmann Funeral Home, 537 N. Superior St., Appleton with Pastor Leon Knitt officiating. Visitation will be on Sunday from 10:00 am until the time of the service. In lieu of flowers, memorial contributions are appreciated to the Juvenile Diabetes Research Foundation.

We would like to thank everyone for all the prayers and love this past month while Jeff was fighting for his life.  Jeff taught everyone he knew how to be kind and caring and to appreciate the things that really matter in this world.  There will be a big hole in this world without Jeff in it but we know he is watching over all of us.  Love one another and be kind.  Love, The Kozlovsky Family

To order memorial trees or send flowers to the family in memory of Jeff Kozlovsky, please visit our flower store.