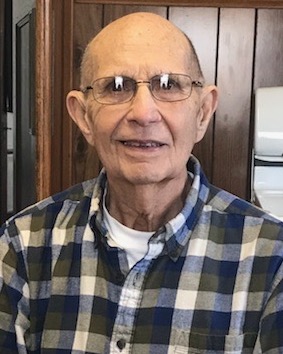 James Peter Probst, age 90, passed away peacefully on December 31, 2022. Jim was born on June 18, 1932, to Edward and Catherine (Schaefer) Probst in Neenah, WI. He grew up in Neenah with his four siblings in the home his father built. He graduated from St Mary’s Central High School and a few years after returning from his service in the US Army, he married Mary Lou Fischer on February 7, 1959, at St Joseph’s Catholic Church, Oneida. Together, Jim and Mary Lou raised their four children in that same home; it was the home he remained in his whole life. He drove delivery truck for 38 years for Automotive Supply Company a career from which he retired.
Jim was a lifelong member of St Patrick’s Catholic Church in Menasha. Much of his life revolved around time spent at the church, volunteering, performing usher duties, working fish fry’s and singing in the choir. Jim was an avid gardener and was known to his family for his Cacti and his geraniums. All of his children have sproutlings from the monster cactus he had in his home.
He enjoyed playing golf for many years, and also enjoyed spending time at the Y. His Y family was a huge part of his life and the friends made there were special to him. What started as a way to remain active truly turned into a social outing for Jim. Fishing was also a passion of his and he spent time on both Little Lake Butte des Morts and Lake Winnebago. In addition, he spent time camping and brought his family to campgrounds throughout Wisconsin as well as adventures to South Dakota, Wyoming and even DisneyWorld.
Jim is survived by his wife of 63 years, Mary Lou; his children: Connie (Rick) Darnick, Greg (Steven Henke) Probst, Peter (Jody) Probst and Paul (Mary) Probst. He is further survived by grandchildren: Eric (Sarah) Hogendorf, Matthew (Amanda) Hogendorf, Ash (Josh Rodriguez) Owen, Daniel Younger, Stefanie (Alex) Fude, Christopher (Jiaying Ren) Probst, and Haley Probst, Tiffany Darnick, and Kaitlyn (Dustin) Skiba and great grandchildren: Trenton, Hannah, Cole and Jillian, Kensley and Hailee. He is further survived by sisters in law Betty Quigley and Sharon Fischer as well as many nieces, nephews and other friends and family.
He was preceded in passing by his parents Edward and Catherine, his siblings: Edward (Helen) Probst, Sister Ann Francis Probst, Robert (Joyce) Probst, and Joseph (Carol) Probst as well as his son in law Brian Owen. He is also preceded by parents in law Anton and Genevieve Fischer and brothers in law Jerry Fischer, and Gary Quigley.
A private memorial service will be held for Jim. In lieu of flowers, please consider a donation to St Patrick's Organ Fund.  Jim was devout, proudly raising his four children in the Catholic faith at St. Patrick's, a church that sustained his faith until his death.  Singing alongside fellow parishioners brought Jim a joyful feeling of community and fellowship.  The family can think of of no better way to honor his memory.
To order memorial trees or send flowers to the family in memory of James "Jim" Peter Probst, please visit our flower store.