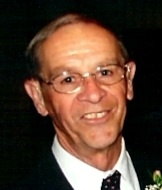 Jim served in the National Guard, Post 258, for eight years and was a machinist by trade for 42 years.  Many people knew him as the man with the wooden bicycle in the community parades or the organizer of sheepshead card games several time a week.  His 11 brothers and sisters could always count on him to bring a funny joke to each family party.

Throughout his life, Jim kept busy.  He had owned a boat and taught his kids and their friends how to waterski.  He and his wife used to square dance and bowl and there were many family volleyball games.  Jim was a devoted Catholic and involved himself in church activities.  He made home-made gifts for his family, worked in his yard and gardens, cheered for the Packers, and there was always a jigsaw puzzle he was piecing together.  He collected coins, stamps, rocks, you name it. And to the end, whenever the weather was nice, he was riding and making his own trails on his bicycle.

A Funeral Mass will be celebrated for Jim at 11 AM on Monday, October 25, 2021 at  St. Thomas More Catholic Church, 1810 N. McDonald St., Appleton. Family and friends may visit at the church from 9 AM to the time of the mass. Military Honors will follow.

Jim loved life and family and will be greatly missed by many.

Please leave a special message or condolences for Jim’s family below.

To order memorial trees or send flowers to the family in memory of James J. Van Asten, please visit our flower store.