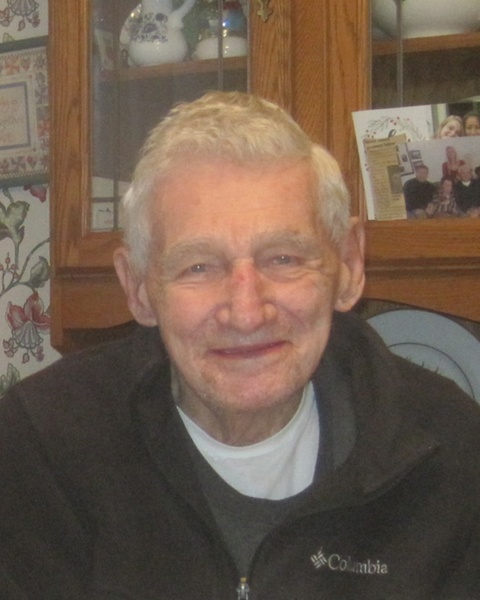 James E. Green passed away on April 15, 2022 in Appleton, WI at the age of 96. Jim was born in Antigo, WI in 1926 to Erving and Blanche Green.
Jim was an outstanding football player on the Antigo High School football team.  It was at Antigo High School where he met his future bride, Agnes Zollpriester.  They married in 1950 and were together for 61 years until her passing in 2011.  Together they raised four sons.
After graduation from High School, Jim enlisted in the Army Air Corps/Air Force. In July of 1944 he was called up to serve his country during World War II.  Jim’s military service began at Sheppard Field in Texas and went on to include time at Truax Field in Madison, WI, Chanute in Champaign County, IL where he attended Jet Engine School, and Boca Raton, FL where he was in Fire Control.  Eventually he was shipped to Fuji, Japan where he served until June 1946.  He was honorably discharged in July 1946 at the rank of Buck Sargent.
After returning from the service, Jim enrolled in college.  He attended the University of Wisconsin- Stevens Point where he also played basketball.  Jim transferred to UW-Madison, graduating in 1953 with a degree in Pharmacy. After graduation, Jim and Aggie relocated to Appleton where Jim completed an internship at Miller Drug.  In 1962, he opened Green’s Pharmacy on the corner of Wisconsin Ave and Meade St.
Jim was an avid reader and sports fan.  He was a longtime Packer fan and season ticket holder.  He enjoyed many leisure activities including fishing, bowling, bridge and his favorite, golf.  He last participated in a golf outing with his four sons at the age of 88.
Jim is survived by his sons: Michael (Janice), Patrick (Kathy), Robert (Julie) and Thomas (Mary).  Eleven grandchildren: Christopher (Elethia), Allison (Zach) McCune, Bradley, Keelyn, James, Nicolette, Emily, Sara, Mia, Tyler and Jenna. Four great-grandchildren: Parker and Piper Green, Kinley and Avery McCune. Jim is also survived by his sister Gail (Gerry) Henke, sister in-laws, Bernice Zollpriester, Betty Rew, and Marliss Zollpriester.
Jim was preceded in death by his parents, his sisters Barbara, Joan Grissom, and Loraine Servi.
There will be a gathering in celebration of Jim’s life on Saturday, April 23, 2022 at the Wichmann Funeral Homes, Superior Street location in Appleton from 9:00am to 10:00am. There will be a Memorial Service with full military honors at 10:00am at the funeral home. Interment will be at Appleton Highlands Memorial Park. For more information and to express condolences, please visit www.wichmannfuneralhomes.com.

Livestream of the service available at this link: Livestream

To order memorial trees or send flowers to the family in memory of James Erving Green, please visit our flower store.