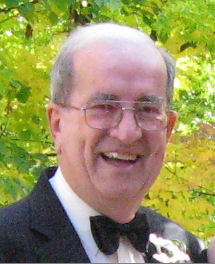 James Larson, age 73, passed away at his home in Georgetown, Texas, following a massive heart attack. Jim was born in Appleton on November 12, 1938, son of the late Frans and Harriet (Petzka) Larson. He was a 1956 graduate of Appleton High School and also graduated from the University of Wisconsin and the University of Wisconsin Law School. In 1966, Jim married the former Jan Goedjen, of Two Rivers, Wisconsin. Jan preceded him in death in 2006. Jim worked as a CPA and partner at Grant Thornton and finished his career as chief financial officer at Badger Periodical Distributors, Inc. He retired early to care for Jan prior to her death.

Jim was an avid golfer and a former member of both Riverview and Butte des Morts Country Clubs. In fact, on the very day of his passing he was seen driving his golf cart and hitting balls at the range. Jim was a natural born performer and enjoyed his involvement in various performing opportunities such as singing with the Fox Valleyaires Barbershop Chorus, Attic Theater, and Basement Theater. He also loved playing cards, especially bridge, and belonged to a men's bridge group for many years. Jim was an active volunteer and leader at St. Bernard's Parish and with the Rotary Club of Appleton, where he was a former president. Jim was also known for his volunteering with Habitat For Humanity, where he met his wife Barb Dubey Smith, whom he married on October 11, 2008.

Jim is survived by his wife: Barb Larson of Appleton; two sons: Jay (Jeanette) Larson of Katy, Texas and David Larson of Chicago; three grandchildren: Joel, Joanna, and Jacob; a sister: Ellen (Lance) Hanish of Scottsdale, Arizona; Barb's children: Michelle Loehr of Oakdale, Minnesota and Mark (Leah) Sawicki of Madison; and her four grandchildren: Ben and Alex Loehr and Noah and Ella Sawicki. There are also aunts, uncles, nieces, a nephew, many relatives, and other friends.

Funeral services for Jim will be held at 11:00 AM Tuesday, February 28, 2012 at FIRST CONGREGATIONAL UNITED CHURCH OF CHRIST, 724 E. South River Street in Appleton, with Rev. Jane Anderson officiating. Interment will be in St. Mary Cemetery. Friends may call at the church on Tuesday morning from 9:30 AM until the time of the service. In lieu of flowers, the family has suggested that memorials be directed to Habitat For Humanity, First Congregational Church, or to the charity of your choice.

To order memorial trees or send flowers to the family in memory of James F. Larson, please visit our flower store.