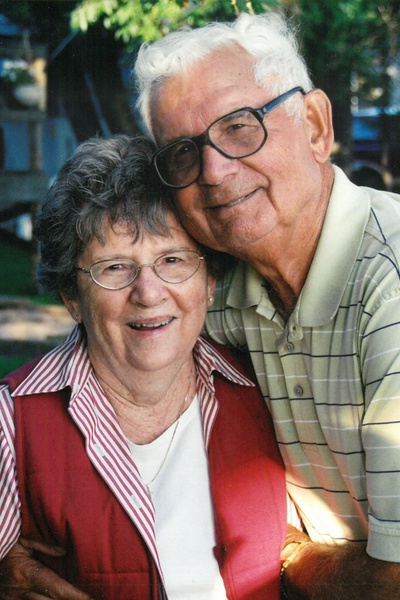 Ivo was proud of his WWII Navy service. He served in several theaters in the Pacific. He shared many experiences with his children and grandchildren, including jumping into the ocean off the burning USS Lexington after it was struck by torpedoes in the Battle of the Coral Sea. He was a machinist in the Navy, returned home and began a 36 year career at Miller Electric Manufacturing Co. shortly after. He had a great career there. He worked in the machine shop, then started the tool and die shop, became the Machine Shop Foreman, and then became Head of Production Engineering. Ivo joined St. Joseph Catholic Church in 1945, served as President of the St. Joseph Holy Name Society, and served on the Parish Council. He was a member of the Freedom VFW.

His joy was his family.  He loved watching his grandchildren and great grandchildren play and enjoy each other.  Nothing pleased him more.

He was preceded in death by his siblings, Marge (Joe) Rosenberg, May (Jack) Schommer, Eileen (Ralph) Weins and John Geurts.

The Funeral Liturgy will be at 11:00 on Thursday, January 20 at ST. JOSEPH CATHOLIC CHURCH, 410 W. Lawrence Street, with Fr. Gerry Pehler, O.F.M. CAP. officiating. Visitation for friends and family will begin at 10:00 and continue on until the time of Mass. Ivo’s Mass will be Livestreamed on Thursday at 11:00 am and can be viewed by visiting Ivo’s obituary page at www.wichmannfuneralhomes.com. Entombment will be at St. Joseph Cemetery, Appleton. In lieu of flowers, a memorial has been established in Ivo’s name to benefit St. Joseph Catholic Church.

The family would like to extend our sincere thanks to his special care giver Linda Carew; to Right At Home staff especially Terry and Kelly; and to St. Paul Elder Care Hospice. All provided loving care for him.

To order memorial trees or send flowers to the family in memory of Ivo J. Geurts, please visit our flower store.