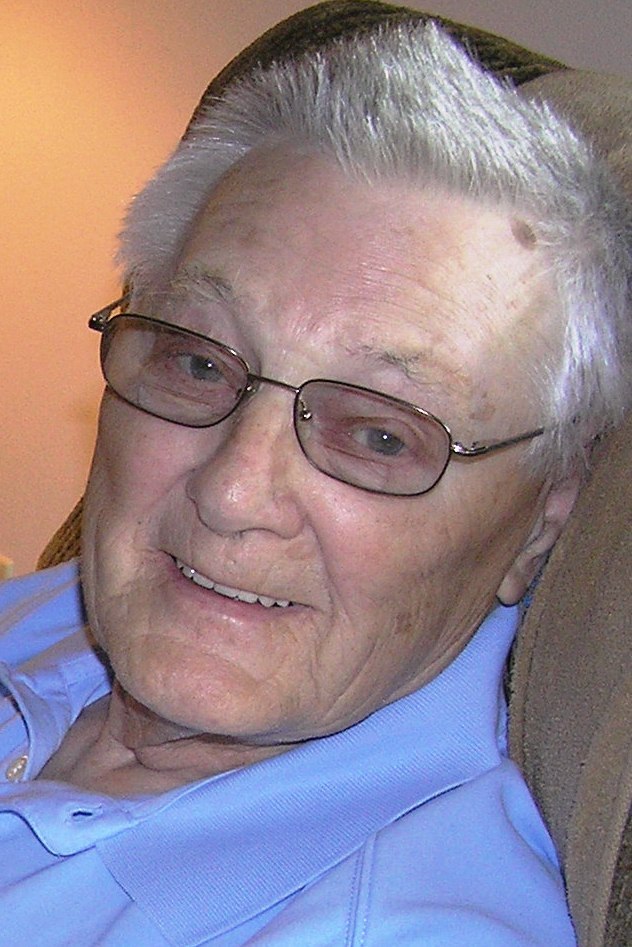 Hilary “Larry” Leo Seidl, age 90, formerly of Menasha, passed away on Sunday, December 14, 2014, at the Wisconsin Veterans Home in King. On January 8, 1924, Larry was born in Hewitt, Wisconsin to the late Leopold J. and Coletta M. (Durst) Seidl. He graduated from St. Joseph's in Hewitt, worked as a farmhand, and then joined the U.S. Navy in 1942 during WWII as an Electrician's Mate 3rd Class. He was active during the Asiatic-Pacific Theater Campaign, and Philippines Campaign. Larry was very proud to be on the christening voyage of the USS Iowa that escorted President FDR to the Crimean Conference. Upon his discharge from the Navy in 1945, he went to Fox Valley Vocational Technical College to become an electrician and finally a journeyman. Larry worked as an electrician for over 25 years at Langstadt's Electric and Galloway Company retiring in 1988. On February 16, 1946, Larry was united in marriage to Delphine “Dolly” Parkinson at Ss. Peter and Paul Church in Wisconsin Rapids; she preceded him in death. He had a great interest in baseball and loved coaching. He coached the Lions Babe Ruth Baseball Club in Menasha and the Menasha Legion Team. He was a member of the St. John's Athletic Association.
Larry will be greatly missed by his loving children: Larry (Jean) Seidl, Steven (Connie) Seidl, Michael (Valerie) Seidl, Cynthia (Jerry) Witt, John (Terry) Seidl, and Mary (Dan) Konkle; his grandchildren: Larry Jr., Benjamin, Elizabeth, Brandon, Jessica, Michael (Michelle), Regina (Mathew), Christin (Kendall) Eric (Laura), April, Justin (Angela), Jason (Tamara), Jared (Heather), and Hilary (Ryan); his great-grandchildren: Brooklyn, Brian, Andrew, Katelyn, Kaylin, Taylor, Logan, Daniel, Hannah, Christian, Braydon, Andreas, Rayna, Emma; sisters: Millie Miller, Rita (John) Fischer, Doris Jonas, Patricia (Roger) Rogney, and Betty Beck; brothers: Clem Rau, Doug Rau, and Eugene (Ruth) Rau; sisters-in-law: Dorothy Rau, Dorene Oetgen, Hazel Parkinson, and Arlene Parkinson; and a brother-in-law: Larry Parkinson.
In addition to his parents and wife, he was preceded in death by his son, David; a granddaughter, Dolly Konkle; brothers: Leroy (Marian) Seidl, Clarence (Margaret) Seidl, and James Rau; his sisters: Marian Weister and Veronica “Toots” (Justin) Kopf; brothers-in-law: Walter Jonas, Leo Beck, Paul Miller, William, Raymond, Richard and Marvin (Stella) Parkinson; sisters-in-law: Audrey Rau, Colleen Rau, and Sherry Parkinson; and other relatives and friends.
The Funeral Service for Larry will be held at 11:30 am on Friday, December 19, 2014, at Wichmann Funeral Home-Laemmrich Chapel, 312 Milwaukee Street in Menasha. Visitation will be held on Thursday evening, December 18, 2014 at the funeral home from 4:00 – 7:00 pm with a Prayer Service at 7:00 pm. Visitation will again be on Friday morning from 10:30 am until the hour of the service at the funeral home. Military Honors will follow. Interment will take place in St. John Cemetery in the Town of Menasha. In lieu of flowers, memorials will be donated to Fox Cities ARC, American Heart Association, and the American Cancer Society in Larry's name.

The family would like to extend a special thank you to the staff at the Wisconsin Veterans Home for their dedicated care and friendship given to Larry over the past 3 ½ years.

To order memorial trees or send flowers to the family in memory of Hilary "Larry" L. Seidl, please visit our flower store.