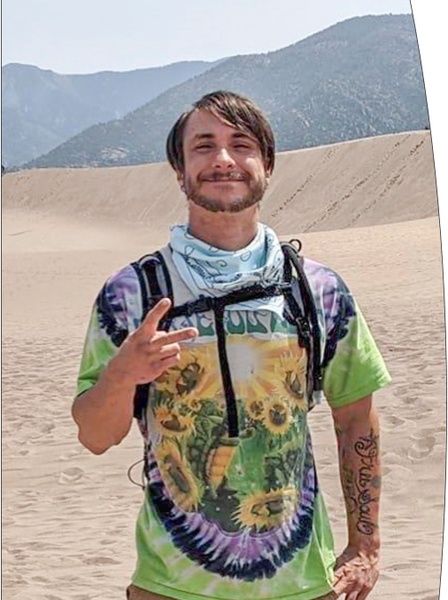 Henry Dylan Augustine passed away at the age of 28 on Tuesday, December 21, 2021. He was a sensitive, loving and caring person who leaves behind many friends and family who love him more than words can express.

Henry’s beautiful aquamarine eyes were the gateway into his soul. He had the sensitive, gentle heart of a poet and the great curiosity of a seeker. Henry had a reverence for nature and was most at home when he was outdoors—hiking, camping, exploring, or reflecting on life’s great mysteries.

Whether he was seven-years-old building a life-sized robot in the basement with masking tape and hardware scraps, or twenty-seven constructing a greenhouse on his land in Michigan, Henry approached life with unapologetic ingenuity and enthusiasm. Henry was an artist at his core, as demonstrated by his passion for creating, recording, and performing electronic music. As a DJ at local venues and events, he found great joy in making sounds that pulsed with feelings and life.

Henry had a playfulness that could light up any room. His great sense of humor and wit was keen as well as goofy. As a parent, Henry would go to any lengths to bring a smile to his children’s faces, acting out stories in engaging voices, breaking into a dance or song, and dreaming up adventures like those from his own youth. Henry was also always up for fun with friends and family and we will all dearly miss the sound of his laughter.

Henry was a loving son, brother, partner, friend, and father. Perhaps Henry’s greatest joy in life was his daughter Juniper. He was driven to be the best dad he could be. His love for Juniper lives on.

Memorial contributions will be used for Juniper’s future.

To order memorial trees or send flowers to the family in memory of Henry D. Augustine, please visit our flower store.