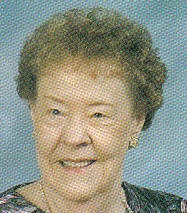 Dear Father, when I pass away perhaps there won't be time to pray, for death may strike so suddenly I'll not have time to call on Thee. So, precious Lord, while yet I live, be Thou my Savior, cleanse, forgive. Help me Lord to watch and pray, to serve thee gladly day by day; to be at all times by Thy grace prepared to meet Thee face to face. Amen.

Helen Grebe was called to the loving arms of her Lord on Saturday, October 11, 2008 at the age of 91. She was born in Underhill, Wisconsin on March 21, 1917, daughter of the late Louis and Ella (Firgens) Zahn. On June 28, 1941 she married Luther Grebe who preceded her in death after sharing more than fifty-four years of marriage. Helen attended the Outagamie County Teachers College and taught in area schools for seven years. As a young woman, she will also be remembered for serving as the church organist in her home church in Gillett. Many will also recall her work as a waitress at the Hyland House in Kaukauna for many years. Helen enjoyed bowling, making candy for the holidays and other special occasions, but was especially dedicated to being a wife and mother.

The Christian Funeral for Helen will be held at 11:00 AM on Thursday, October 16, 2008 at TRINITY EV. LUTHERAN CHURCH, 804 Grignon Street in Kaukauna with Rev. Mark Luetzow officiating. Inurnment will be in the church cemetery. Friends may call directly at the church on Thursday morning from 10:00 AM until the hour of the service.

The family would like to extend their sincere gratitude to all of the “little angels” at St. Paul Elder Services who cared so well for Helen during her stay. You took care of our mom like she was your own, and we will always remember your kindness, care, and concern.

To order memorial trees or send flowers to the family in memory of Helen N. Grebe, please visit our flower store.