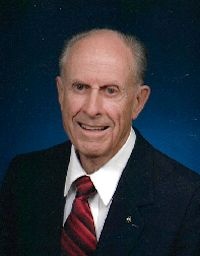 Hal was born October 6, 1924 in Ripley, Ontario, Canada, son of the late Thomas and Nellie (Robertson) Donnelly. As a young man, Hal was home-schooled, and lost his mother at the age of 10. He graduated high school at the age of 17, and began building model airplanes in the family garage. With encouragement from his science teacher, applied for admission and was accepted to the University of Toronto. He graduated in 1947, and throughout his college career, he was involved in various mathematical and scientific projects, each of which helped to shape his professional future.

Hal married the former Hazel B. Trull on June 17, 1950, in Toronto, Canada. Together the couple shared 69 happy years together.

Hal was employed for his total career with the Kimberly Clark Corporation in technical and management positions. His work experience involved solving newsprint quality problems for the New York Times, pulp bleaching, creped tissue manufacturing developments, consumer and new product development, as well as research management and international technical consulting. He enjoyed the many friendships which developed through his professional career, not only in the United States and Canada, but in Australia, Columbia, Great Britain, Hong Kong, Italy, Japan, Mexico, China, South Africa, South Korea, and Taiwan as well.

His interests included service work, playing bridge, gardening, golf, cross country skiing, investments, reading, dancing, tennis, and inline roller skating. He was a member of the First United Methodist Church in Appleton, the Golden K Kiwanis Club, and he was also a former member of the Kinsman Club of Canada, as well as the Technical Association of the Pulp and Paper Association. He was a man of good humor, and will be remembered by all for his sharp wit and many puns.

Funeral Services for Hal will be held at 11:00 am, on Wednesday, June 5, 2019, at First United Methodist Church, 325 E. Franklin St., Appleton. His final resting place will be Appleton’s Highland Memorial Park. Visitation will be on Wednesday at the church from 9:30 am until the time of the service. In honor of the families wishes, please no memorial contributions or flowers, but your presence is appreciated.

To order memorial trees or send flowers to the family in memory of Harold F. Donnelly, please visit our flower store.