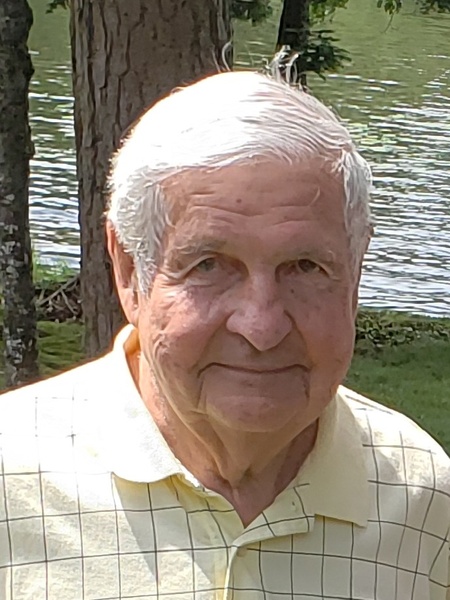 Harold Erwin Gensler, age 94, peacefully passed away December 24, 2021 at his residence in Three Lakes, Wisconsin where he resided for the last two years.

Harold will be forever missed by his son Steven (Patricia Thurmond) of Three Lakes, his granddaughters Yana of Franklin, Wisconsin and Ali of Tucson, Arizona as well as many nieces, nephews, sister-in-law Ethel Schulze and sister-in-law Marlene Gensler.

He was preceded in death by the love of his life Shirley (nee Schulze) in 1997, his brother Raymond of Appleton in 2011, sister-in-law/brother-in-law Carol and Jim Minkebage of Kaukauna, brother-in-law Louis Schulze of Appleton, and many dear and close friends of he and Shirley in the Appleton area.

Harold was born on July 18, 1927 to his parents Erwin and Esther (nee Buth) in Clintonville, Wisconsin where they lived until moving to Kaukauna, where he met his beloved Shirley in High School.

Shirley and Harold wed September 23, 1950 at Immanuel Evangelical & Reformed Church in Kaukauna.  They enjoyed traveling to many cities and countries, along with many good friends.

Harold joined the Army in 1946 and fought in Korea and was honorably discharged in 1947.

Harold began working at Badger Highways Company in Menasha, Wisconsin in 1949 and eventually became the owner/President of this asphalt paving company, until his retirement in 1993, when his son Steven took over.  Although retired, Harold still went to work almost every day – even if only for a few hours – until they sold the business in 2014.

He enjoyed golfing with his golf buddies every Tuesday in the Appleton area, and especially loved fishing at the family cabin on Crooked Lake in Three Lakes with his best friend/brother Raymond.  Anyone who knew Harold knows how much he loved the cabin and Crooked Lake.

While Harold lived in Three Lakes for the past two years, he enjoyed the many friends who cared about him and visited with him – he was at peace in Three Lakes and had fun going for golf car rides and picking raspberries.

Harold is also survived by Marlene Fisher-Gensler through marriage.

Burial arrangements will be private.

To order memorial trees or send flowers to the family in memory of Harold E. Gensler, please visit our flower store.