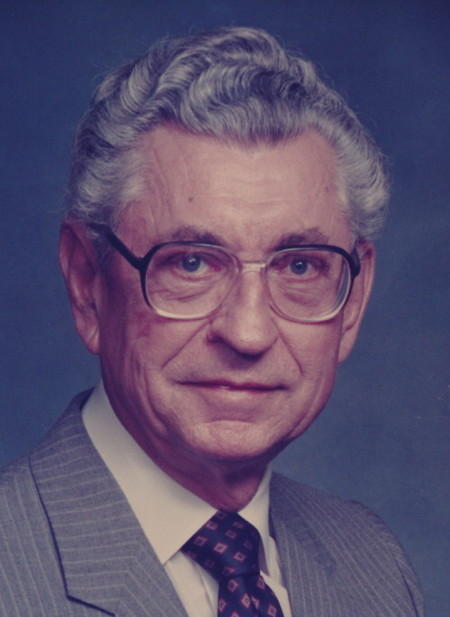 Harley B. Splitt, died on Tuesday, October 16, after a three year courageous battle against cancer. To the week of his death he enjoyed playing golf with his ex-Riverview Country Club foursome. Another bright light of the recent period was his Old Glory Honor Flight to Washington D.C. He was lucky enough to go on the plane with his good friends, Carl Stracka and Bud Heinritz.

Of all the charitable contributions he made the one with the most personal impact was the annual scholarship foundation he established years ago for an honors graduate of Little Wolf High School in Manawa, Wisconsin. The recipients' letters of gratitude and details of their present studies and extra curricular activities were a source of considerable pleasure to him.

Harley was born on May 23, 1923, on a farm in Union Township, Waupaca County to Henry and Ella (Jahsman) Splitt.

He attended State Road School, a rural one-room school where, for several years before and after graduation, he played the piano for the annual Christmas programs.

After graduation from Manawa Little Wolf High School in 1941 he enrolled at the University of Wisconsin, Madison and became a member of Alpha Kappa Lambda social fraternity.

In March of 1943 he entered into military service. Upon graduation from the Army Finance School he served in the Army Finance Department, attached to the Air Transport Command in the China- Burma- India Theatre of War.

On April 17, 1948 he married a law student, Cody Wendt, and after her graduation they moved to Appleton in August 1948. He completed the experience requirement for his Certified Public Accountant certificate while auditing corporations.

He joined Fox River Tractor Company as chief accountant in January of 1953. It was the business that went through several ownership changes that he was to be associated with throughout the remainder of his business career. He served as a member of the Fox River Tractor Company Board of Directors and as Corporate Treasurer. When the company was sold to the Koehring Company he was retained as chief financial officer until Koehring sold the business to Piper Industries, Inc. in March of 1981 and he was promoted to General Manager. He implemented the sale of the business before his retirement in 1988.

His community involvement included membership for many years in the Kiwanis Club of Appleton and the Wisconsin Society of Certified Public Accountants. He served as legislative committee chair and chairman of the Industrial Board of the Appleton Area Chamber of Commerce. He served as treasurer of the Kiwanis Club, the Outagamie County Republican Party and the First Congregational Church and as auditor of fund raising for the Appleton Memorial Hospital Association. He served on the boards of the Appleton Taxpayers Alliance, the National Alliance for the Mentally Ill- Outagamie, and the State Mental Health Council. He never lost his childhood appreciation of music. He enjoyed symphonies and ballets through out the United States and Europe. He enjoyed traveling and outdoor activities including hunting and fishing. As an avid golfer and tennis player, he belonged to Riverview Country club and the Fox River Cities Racquet Club. He was grateful for the companionship of the many friends with whom he shared these activities.

A memorial service for Harley will be held on Monday, October 22, 2012 at 11:00 AM at the FIRST CONGREGATIONAL CHURCH OF CHRIST, 724 E. South River St. with Rev. Jane B. Anderson officiating. A time of visitation will be held on Monday from 9:30 AM until the time of the service at the church.

Online condolences may be expressed at www.wichmannfargo.com. In lieu of flowers gifts can be made to the Harley and Cody Splitt Donor Advised Fund of the Community Foundation of the Fox Valley Region Inc.

To order memorial trees or send flowers to the family in memory of Harley B Splitt, please visit our flower store.