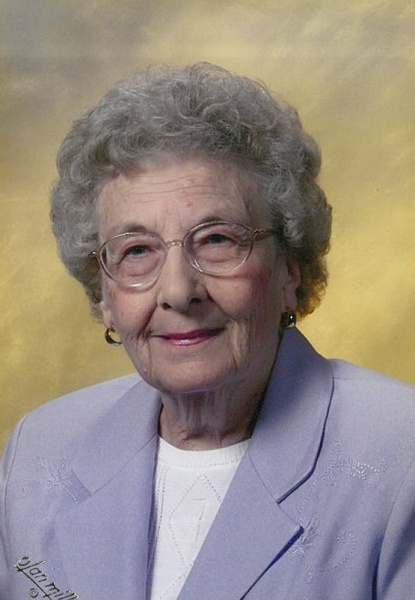 Grace Pearl (Lahey) Bauknecht Davis, age 97, passed peacefully on December 1, 2021.
Grace was born on January 17, 1924, in Two Rivers, Wisconsin, the daughter of Walter and Pearl (Wagner) Lahey. Before she reached the age of 18, her Dad’s work had taken the family to 18 different communities throughout Wisconsin, Pennsylvania and West Virginia. As a result, Grace learned to make friends quickly and developed a lifelong love of reading.
She married Lyle A. (“Butch”) Bauknecht in Two Rivers on January 28, 1944, shortly before he was sent overseas for the duration of World War II. After the war, they lived in Colorado and Pennsylvania, where Butch pursued an education in engineering, eventually returning to make their home in Wisconsin.
In the late 1960s, Grace started a new adventure, enrolling in college while still holding down wife and Mom duties. In 1970, she earned a BS degree (with honors) in Library Science from the University of Wisconsin-Oshkosh. One of her proudest accomplishments after graduating was working as librarian at a brand-new elementary school, where she had the opportunity to set up the library. She personally chose–and read–every book on its shelves and shared her love of reading with countless young students.
Grace enjoyed contributing to her community. She was a charter member of the Stardusters Dance Club in Appleton and served for many years in Chalice Circle of Kings Daughters; Women’s Club; First Congregational Church of Appleton; the Appleton Medical Center gift shop; Ex Libris Book Club; and various golf leagues and bridge clubs.
After Butch’s death in 2000, Grace was blessed with the arrival of another good man in her life. She married John I. Davis, of Appleton, on November 2, 2002. John passed away in 2019.
Grace is survived by her sister Patricia (“Pat”) Allie, Stoughton; son Brad (Mary) Bauknecht, Oshkosh; daughter Becky (Lisa) Bauknecht, Madison; and step-daughters Sara (Christopher) Davis, Chicago, IL; and Dr. Nell Davis, Denver, CO. Grace is also survived by three grandchildren: Chris (Stephanie) Bauknecht, Oshkosh; Kate (Michael) Nordmann, Oshkosh; Caroline (Ian) Rowley, Milwaukee; six great-grandchildren: Drew, Will and Evelyn Bauknecht, and Becca, Cole and Sophie Nordmann, all of Oshkosh; as well as many nieces and nephews.
Grace was preceded in death by her parents; two husbands; and her brother-in-law, Dr. Francis Allie.
A funeral service will be held at 2:00 p.m. on Saturday, December 11, 2021, at First Congregational United Church of Christ, 724 East South River Street, Appleton, WI 54915. Please observe the Church’s protocols for masking and distancing.
In lieu of flowers, a memorial has been established to benefit First Congregational United Church of Christ, Appleton.

To order memorial trees or send flowers to the family in memory of Grace Pearl Bauknecht-Davis, please visit our flower store.