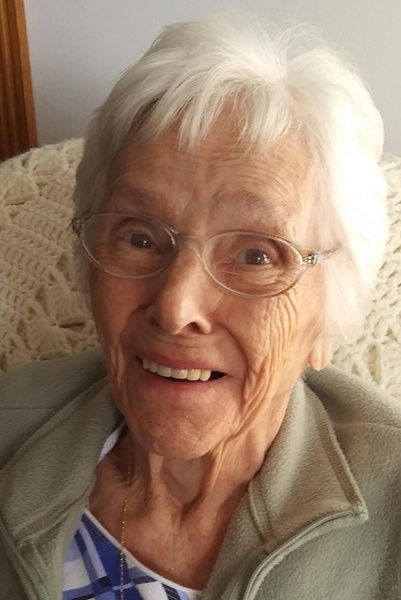 Grace Lesperance, born 100 years ago, passed away quietly into the Lord’s presence as she slept on April 30, 2022.  She was born in Menasha, Wisconsin on February 21, 1922, to Charles and Bertha Grade.  In 1943 she joined the Army Nurse Corps.  She met and married her husband Dave at Camp Swift in Texas in 1945.  After the war they settled in Menasha and she later worked as a Registered Nurse at Theda Clark Hospital.  In 1969, they packed up the youngest five kids and moved to Hollywood, Florida, where they joined Annunciation Church and made many dear friends.  Grace worked at Hollywood Memorial Hospital until they retired in 1984.  She and Dave enjoyed traveling for the next ten years until he died in 1994,  She was proud to be part of an Honor Flight to Washington DC that she made in 2015 at the age of 92.

She was a woman of great faith who truly lived the commandment to love and serve others.  She will be dearly missed by those who were blessed to have her in their lives.

We were blessed by the caregivers at Frontida in Kimberly and will always remember their kindness.

Visitation will be held at the Wichmann Funeral Home, located at 537 N. Superior Street in Appleton on Thursday, May 5, 2022 from 1:00 PM until the time of the prayer service at 3:00 PM.

I lieu of flowers, we would be grateful for donations to a local food pantry or masses said for Grace.

To order memorial trees or send flowers to the family in memory of Grace Lesperance, please visit our flower store.