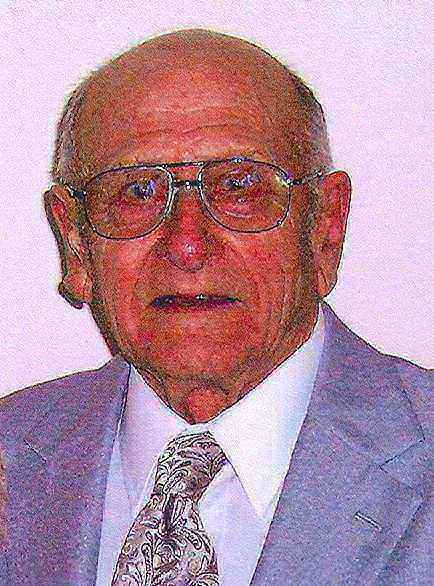 Gordon F. Schroeder, age 88, passed away on Wednesday, April 20, 2011, at St. Elizabeth Hospital, Appleton. Gordon was born on January 16, 1923, in Greenville, son of the late Charles and Anna (Elkert) Schroeder. He attended Appleton High School, graduating in 1940. On October 20, 1945, he married Myrtle Koch at Our Savior Lutheran Church in Neenah. Gordon worked at Miller Electric Manufacturing Company until his retirement in 1984. He and Myrtle also farmed in Greenville, and he was a volunteer firefighter for 25 years. Gordon enjoyed fishing and bowling, playing cards, especially sheepshead, and traveling.
Gordon is survived by his wife of 65 years, Myrtle; a son, Mike (Carol) Schroeder, Appleton; a daughter, Paula (David) Bauman, Kaukauna; four grandchildren, Jennifer (James) Spencer, Christopher (Tracy) Schroeder, Timothy Bauman, and Andrew (Katrina) Bauman; six great-grandchildren, Christopher, Peyton, Tyler, Kyle, Arial, and Riley; one sister, Mae Relien; and many other nieces and nephews. He was further preceded in death by a granddaughter-in-law, Peggy Bauman; a brother, Robert (Alice) Schroeder; a sister, Hazel (Jim Jochman and Norb) Jochman; and a brother-in-law, Fred Relien.
The funeral service for Gordon will be held at 11:00 a.m. on Monday, April 25, 2011, at IMMANUEL EV. LUTHERAN CHURCH, 3703 W. Fairview Rd., Neenah, with Rev. Paul Meier officiating. Friends may call on Monday at church from 9:00 a.m. until the time of the service. Interment will be private at Highland Memorial Park, Appleton. In lieu of flowers, memorial contributions in Gordon's name may be made to Immanuel Ev. Lutheran Church, Neenah.
The family would like to extend a sincere thank you to the Clayton First Responders, Gold Cross Ambulance, Drs. O'Brien and Mahrindra, and to the entire nursing staff, especially Brenda, at the St. Elizabeth Hospital ICU.

To order memorial trees or send flowers to the family in memory of Gordon F. Schroeder, please visit our flower store.