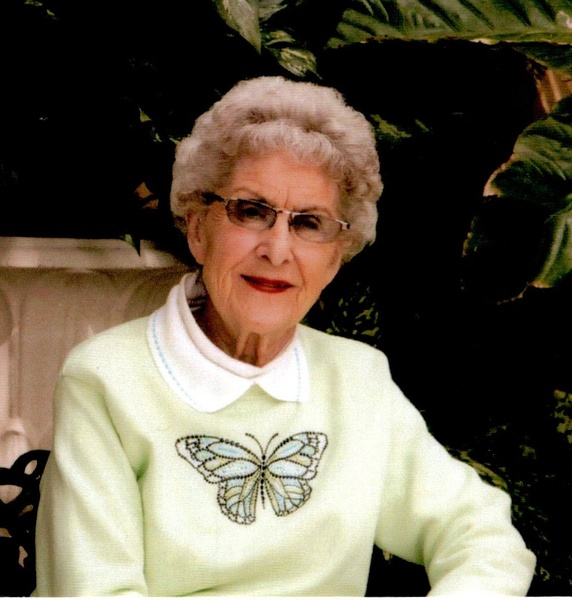 After 51 years, Mom and Dad are finally reunited on the heavenly ballroom dancing floor. A lifelong resident of Kimberly, WI, Gloria Antoinette (Cavil) Kraft, passed away Thursday morning, February 10, 2022, at ThedaCare Regional Medical Center-Appleton. With her at her side: her son and daughter-in-law, Fr. John of Sacred Heart Catholic Church and hospital chaplain Ben. She was 98.

Born on September 26, 1923, she is the daughter of Richard, Sr., and Josephine (Gundchevich) Cavil. Growing up on North Sidney Street, she attended Holy Name of Jesus Catholic Grade School and was graduated from Kimberly High School (Class of 1941.) In her youth, Gloria loved swimming and diving, acrobatics and especially dancing. During her high school years, her friends gathered in the back room at Whitey’s Tavern on North Main Street to study and dance. After high school, she worked at Mueuer’s Drug Store in downtown Appleton and at the Kimberly-Clark paper mill in Kimberly.

Gloria met the love of her life, Harold (Harry) C. Kraft of South Jefferson Street, Appleton, at Al Brandt’s Tavern on South Oneida Street. They married June 21, 1947, at Holy Name Church and raised three children at their homestead on South James Street. While Dad worked as a plumber-steamfitter for Bassett Refrigeration (now Bassett Mechanical of Kaukauna), Mom was a homemaker, skilled in the kitchen and with needle and thread. She was a Girl and Cub Scout leader. With four close friends, they formed a championship bowling team in the Lucky Strike Leage at Jerry’s Lanes in Kimberly. In the children’s later years, she worked as a crossing guard for the Village. But Friday nights were for Mom and Dad—cocktails and dinner at a supper club, and an evening of dancing.

When Harry died suddenly on January 11, 1971, she became a fulltime employee, first as a sales associate at DeKoven Drug Store in downtown Appleton, then in the brand new baking department inside Eiting’s Super Market in Kimberly, and ending her career as an associate overseeing the notions and sewing department at J.C. Penney Co., until the store closed its downtown Appleton location in 1984. In her retirement years, she loved going to lunch with her sisters and friends, bicycle riding, walking, reading and sharing romance novels, sewing, going to rummage sales and thrifting, caring for her home of over 60 years and flying to visit her children and grandchildren, in whom she had great pride and much love. She belonged to the Royal Neighbors of America and Club 342, a retiree group from the downtown Penney’s store. She prided herself on being the first in the voting line at the Kimberly Municipal Building for every election. She had the distinction of being one of the longest-tenured patients of dentist Dr. Robert Burns, now the Kimberly Dental Clinic. She shared her last years with dear friends and staff at The Gardens of Fountain Way.

A person of deep faith, she is a lifelong member of Holy Spirit Catholic Church wearing out her prayer book and rosary, used on a daily basis. When unable to attend Sunday Mass, she joined her son and daughter-in-law in weekly worship at Melnik Presbyterian Church, Whitelaw WI, where her son serves as pastor.

Gloria is survived: by a daughter, Lesley Josephine (Kraft) Hofberger of Enid, OK, her family – Jamie Hofberger (Karol Gilman) of Minnetonka, MN, and Kelly Jo Walker and partner Dan Greenberg of Denver, and Kelly’s children Latisha, Blair and Clay and grandchildren Braxton, Hudson and Harper; by her daughter-in-law Ursula Kraft of Byron Center, MI and her daughter Christiene (Robert) Sundelius, also of Byron Center, and their children Jordan (Sydney) and Gabriele; by her son Warren Kraft of Combined Locks, formerly Oshkosh, and his wife Elizabeth, their children Jessica (Craig) Bergner of Appleton and their sons Lawson and Taytum, and Nathaniel of Oshkosh/Tokyo; plus numerous nieces and nephews and their children, and her very special friends. In Gloria’s mind, family always came first.

She was preceded in death by her husband Harold (1971), by her son Wesley (2020) and her son-in-law Gary Hofberger (2018), by her parents and Grandma’s second husband, George Stutzman, and her brother Richard Jr. and sisters Charlotte Zephirin, Genrose (Verstegen) Staley and Rosemary Tousey; by her in-laws John and Mayme (Schrimpf) Kraft of Appleton, and their children Dorthy (John Levine), LaVerne (Norbert Pierre) and Raymond (Betty) Kraft.

The family will greet friends and relatives on March 19, 2022, at Holy Spirit Catholic Church, 620 E Kimberly Ave, Kimberly, WI. Visitation begins at 9:30 until the time of Mass at 11:00 a.m. The Rev. Carl Schmit will officiate. Burial will follow in the Holy Name Cemetery on South Railroad Street, Kimberly. A luncheon will be held thereafter.

In lieu of flowers, please consider memorials to the Salvation Army of Appleton or St. Vincent DePaul of either Kaukauna or Appleton—two of Gloria’s favorite charities.

To order memorial trees or send flowers to the family in memory of Gloria A. (Cavil) Kraft, please visit our flower store.