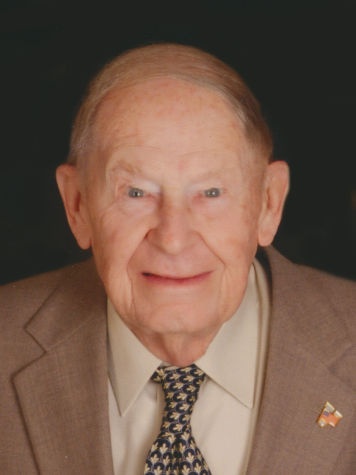 Glenn Hass, age 92 of Appleton, was called to the waiting arms of his Lord on Saturday morning, August 31, 2019. Glenn was born in Kaukauna on November 7, 1926, son of the late Otto and Elvira (Ploetz) Hass. He attended high school and two years of technical school. In 1949 he married Mary Hillegeer, and the couple was blessed with a daughter, Sherry. Mary passed away in 1996. In 2006, he married Phyllis Hinz Winkler in Appleton; she survives.

For many years, Glenn worked at Appleton Papers and was involved with many aspects of the business, including sales, marketing and management. He retired after forty-four years of service there. Glenn was an avid runner for most of his life, and enjoyed running in various events into his 80’s. He was a loyal fan of the Packers, Badgers, and Brewers, and also loved to golf. For over fifty years, the family owned a cottage at Berry Lake, where he enjoyed many happy times entertaining family and friends.

The Christian Funeral Service for Glenn will be held at 11:00 AM on Wednesdsay, September 4, 2019, at St. Paul Ev. Lutheran Church, located at 302 N. Morrison Street in Appleton, with Rev. Matthew Holtz officiating. Full military honors will follow the service. Entombment will take place at Highland Memorial Park. Family and friends are invited to gather at the church on Wednesday from 9:00 AM until the hour of the service. The family has suggested that memorials be directed to St. Paul Lutheran Church or Fox Valley Lutheran High School.

To order memorial trees or send flowers to the family in memory of Glenn W. Hass, please visit our flower store.