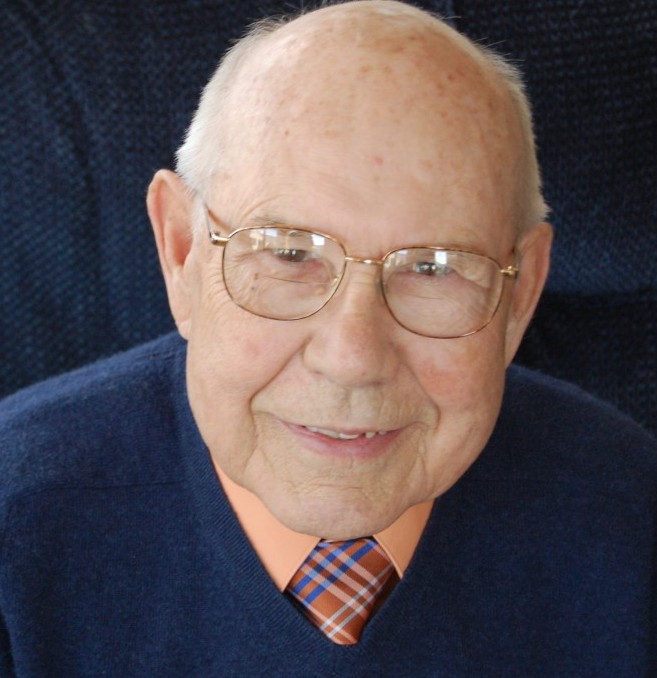 “And now these three remain: faith, hope and love. But the greatest of these is love.” 1 Corinthians 13:13

Known for his friendly curiosity, incredible memory, and telling stories of virtually everyone he met, Glen Wolff passed from this world on May 2, surrounded by his family.

He was born in Appleton on May 28, 1927, the second son of Eddie C. and Gertrude Butter Wolff. Glen and brother Lyle grew up outside in an Appleton of woods and deep ravines then leading to the Fox River. Hunting and fishing “up north” were central to family life.

During the Depression the family spent a few years living with Eddie’s parents on their dairy farm near Black Creek, where no doubt Glen formed values that characterized his whole life: hard work and generosity. He would tell of his grandparents’ small house heated by one wood stove in the kitchen, yet buying him a pony named Major and later a bicycle when Glen’s family moved back to Appleton. His dad was a wire weaver and mom was known as a great cook and baker, and on the side the family sold blueberries in the summer and Christmas trees in winter.

Glen graduated from Appleton High and made his first trip to Madison to attend UW. He finished a math degree in three years, not only because of his great memory but also because his mother still did his laundry, sent weekly through the US Mail.

Glen served in the Army as WWII was ending, stationed two miles from Gen. MacArthur’s Tokyo HQ in Occupied Japan. A favorite story was shipping out from San Francisco, under the Golden Gate on Thanksgiving,1946. The war over, he returned to Appleton the next year on his birthday, May 28—in a snowstorm!—and served in the Army Reserves until 1955.

Through the GI Bill, Glen went to Law School in Madison, graduating third in his class. He began his long career with Home Mutual (later named Secura) Insurance Company as a claims adjuster driving 48,000 miles a year, based in Milwaukee and then Minneapolis where he met beautiful Beverly Larson in July of 1954. Their wedding that December began 54 years together.

In 1955 the couple moved to Eau Claire where Kathy and Sue were born, then to Appleton in ’59 where Carol arrived. While Bev shepherded the girls in the arts, Glen introduced the family to the outdoors in all seasons, building an ice rink in the back yard, and taking their first camping trip around Lake Superior in 1964 with borrowed gear. Over the next decade on summer vacations, Glen was at the wheel of their station wagon hauling their big tent camper in trips all over the states, from Maine to California.

Glen and Bev made many friends through golf, bowling, and church where he taught catechism. He sold a lot of light bulbs for Lions’ Club, and became active in AFS when Kathy and Sue got involved in high school, and Carol was chosen for their summer program in Iran in 1976.

Glen retired from Secura as a vice president in 1991, giving him more time to enjoy and tell proud stories of his grandchildren. Glen also joined high school friends in a group dubbed ROMEOs (Retired Old Men Eating Out), whose numbers dwindled but continued to meet for lunch until just last fall. Glen and Bev traveled more around the country, notably a driving trip all the way to Alaska with Lyle and his wife Lila in their RV, and nine winters at the white sand beaches of Destin, Florida.

Glen took pleasure in quiet service to others, driving people who no longer could, plowing out neighbors’ sidewalks, helping widowed friends with taxes, visiting the sick, and most of all lovingly helping Beverly with daily treatments for chronic conditions. After her passing in 2009 he became a hospice volunteer. When he moved to The Heritage in 2016 he’d take a new friend in a wheelchair on walks around the property, even with little use of his own left arm after a fall.

Glen was known for serenading people with old tunes. He loved football, the Packers and Badgers, ice cream, many dogs and even cats through Bev’s influence.

The family extends deepest thanks to the staff of The Heritage and Peabody Manor, ThedaCare at Home Hospice, Dr. Deborah Ihde and her team, and especially to the church family of Prince of Peace for their caring presence through all of the seasons of life.

‚Ä®Glen’s life will be celebrated Monday, May 6 at Prince of Peace. Visitation 9 to 11 a.m., service at 11 a.m., followed by military honors and a luncheon. Contributions can be made in memory of Glen to “Prince of Peace Lutheran Church and designated for “Gifts of Hope” (in the memo line), a program providing for basic needs of local homeless teens, through Prince of Peace, 2330 E. Calumet St., Appleton, WI 54915.‚Ä®

To order memorial trees or send flowers to the family in memory of Glen W. Wolff, please visit our flower store.