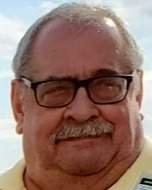 Gerald Daniel Fritzsinger, known to many as “Dan” or “Boone,” of Menasha, WI, died suddenly, but peacefully at his home at the age of 70. He was working diligently through some physical health issues and had recently recovered from esophageal cancer. Dan was born in Lacrosse, WI, on February 16, 1952, grew up in Wisconsin Rapids and graduated from Assumption High School. He married Beth (Munro) Fritzsinger in 1972 and spent the following decade riding his motorcycle around Wisconsin with Beth and enjoying his young adult life with close friends. He and Beth moved to Appleton in the late 1970’s, where he started his job at General Electric (where he would work for the next 29 years), and where their only child, Jessica, was born. Dan was known as diligent and hard-working. He received many accolades over the years for his dedication to the General Electric sales and customer service teams. After retiring from General Electric, he spent his days working part-time with parks’ management for the Village of Fox Crossing. Later in his retirement, he took care of his wife, Beth, after her own medical events, until her passing in 2020.
Dan had tremendous vitality. He loved his family and friends, deeply. One could find him organizing his garage (again), working on restorations for the Corvette, meticulously planning (everything and anything), spending time in the woods and on the shooting range embracing his love and dedication to trap shooting with friends, or spending time with his sister or grandchildren on opposite coasts of the country.
Dan is survived by his sister, Kyle Fritzsinger, daughter, Jessica (Fritzsinger) O’Neil, son-in-law, Daniel O’Neil, two grandchildren, Keira and Eamonn, and many friends and family. He is preceded in death by his wife, Beth, his mother, Vivian (Schaefer) Fritzsinger, and his father, Jack E. Fritzsinger.
Dan was a pragmatic man who preferred to keep things “simple.” He would want his friends and family to gather around food and drink and “solve the problems of the world.” He would also want to be remembered by his many one-liner comments, his eagerness for an argument that he would always win, and his deep affection for and devotion to his family and friends.

To order memorial trees or send flowers to the family in memory of Gerald Daniel Fritzsinger, please visit our flower store.