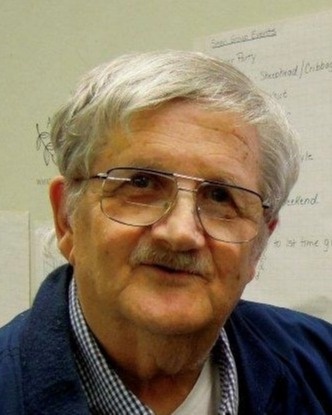 George S Waring, 84, of Little Chute passed away peacefully on Thursday, September 22, 2022 with his loving family by his side.  He was born March 31, 1938 to the late Franklyn and Mary (Trudell) Waring in Iron Mountain, MI.

He proudly served his country with the Marines and was stationed in Japan, where he found a lifelong love of the culture, which he shared with his children and grandchildren.

He also had a love of aviation and was a lifelong member and volunteer with the EAA. Until this past year, he never missed EAA AirVenture in Oshkosh, where he would always give out his signature hugs to everyone he met. George also enjoyed astronomy, gardening, and being his grandkids’ “Favorite Grandpa in Kaukauna.” He thoroughly enjoyed reading and encouraged his children and grandchildren to read and to never stop learning. He was always willing to share what he knew, and participated as a mentor in the Pulaski Learn to Hunt program. He enjoyed researching his family ancestry and was very proud of his Viking heritage. He enjoyed the company of others and was loved by all he crossed paths with. He would do anything and everything he could to help others and would only ask for smiles in return.

He drove many miles as a long-haul semi driver for Rich’s and Bob Miller Trucking. He later also worked at Tidy View Dairy Farm.

He was preceded in death by his parents Franklyn and Mary, brother Clinton (Buzz, wife Margaret) Waring, and sister Mary (Jerry) Vallard.

Funeral will be held on Saturday, October 8, 2022 at Fox Valley Christian Fellowship, 1200 W Kimberly Ave, Kimberly, WI 54136. Visitation will be from 9am-11am, with service to follow at 11am. FVCF will stream the service online.

In lieu of flowers, donations can be made to the American Heart Association

George’s family would like to thank ThedaCare Hospice and St Elizabeth Ascension staff.

To order memorial trees or send flowers to the family in memory of George S Waring, please visit our flower store.