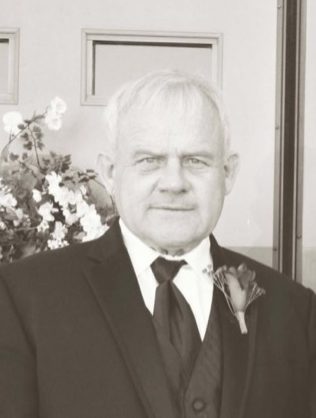 The family thanks you for your support. In order to keep everyone safe and healthy we encourage the wearing of a mask.

1 Corinthians 16: 13-14 By wisdom a house is built, and by understanding it is established; by knowledge the rooms are filled with rare and beautiful treasures. For every house is built by someone, but God is the builder of everything. Be watchful, stand firm in the faith, act like men, be strong. Let all that you do be done in love.

As every good builder knows, a house is built with a solid foundation, sturdy walls and a strong roof, just like a family is formed in love, determination and a good dose of humor. Born into a family of thirteen children, Gary’s foundation was a result of his strong-willed Irish mother and his determined Dutch father. This laid the groundwork for his own family, fiercely loyal and dedicated to one another. He enlisted in the United States Army and served his country in Vietnam and Korea earning a purple heart.

Gary married Mary Van Den Heuvel, and together they built the strong walls of their family. An active and involved father, Gary enjoyed coaching basketball and supporting his four children, Todd, Timm, Trisha and Troy in their many activities. While he did this, he founded Vander Loop Masonry and constructed many beautiful homes in the area, including his own. He established lifelong friendships on Lake Lucerne and a lake home that would be enjoyed by his family to this day.

Gary’s legacy will live on through his stories, the knowledge he shared, and the values and beliefs he instilled in his children and grandchildren. His children carry on his strong conviction, unshakeable work ethic, and devotion to family. His grandchildren will remember his willingness to tie a shoe, dig for worms, fish for hours and take as many four-wheeler rides as possible (stopping for a chat along the way of course)!

He was happiest cheering on his grandchildren from the sidelines at everything from singing the National Anthem, coaching the next wrestling move to his grandsons on the mat, celebrating as a touchdown or goal was scored or a basket was made. He was in awe of their grace and agility on the dance floor, in the water, or tumbling through the air. And when those same kids had their hardest moments, there was Grandpa. He was always there.

Funeral services will be at 11:00 am, on Saturday, December 4, 2021, at Holy Spirit Catholic Church, 600 E. Kimberly Ave., Kimberly. Visitation will be on Friday, from 4:00 to 7:00 pm, at the Fargo Funeral Home, 400 W. Wisconsin Ave., Kaukauna, with a prayer service at 7:00 pm and full military honors. In addition, visitation will continue on Saturday at the Church from 9:00 am until the time of the Mass. In lieu of flowers, memorial contributions are appreciated to CP Fox Cities.

Thank you to our friends and family that have shared a mumbler, stopped to chat with Gary on his daily four-wheeler rides, listened to his tall tales, or stories about his beloved grandchildren.  Those moments meant the world to him.

To order memorial trees or send flowers to the family in memory of Gary L. Vander Loop, please visit our flower store.