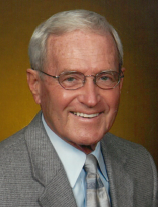 Fred Pahl, 90, died suddenly, after a brief illness, on January 15, 2022. He was born on October 23, 1931 in Shawano County, WI and graduated from Shawano High School in 1949. Fred began work at Aid Association for Lutherans (now Thrivent) in 1950 after one year at Valparaiso University. His employment was interrupted when he joined the Navy in March of 1951 during the Korean Conflict. After boot training and two months of school, he served forty-four months at the Naval Air Station in Jacksonville, Florida. Upon discharge in 1955 he returned to AAL, completing a 40 year career in early 1994. In October 1995 he began a part-time eighteen year career at Macy’s Department Store, retiring for the second time in 2013 at age eighty-two.

Fred was a long-time, active member of Faith Lutheran Church. He and Barb also were members for an interim four year period at the First Congregational Church in Appleton. Besides his volunteer efforts at Faith Church, he served eleven years as a board member for the Appleton YMCA, and twenty years as a board member for the Appleton Boychoir, fourteen as its first president from 1985-1999. He also volunteered at the Appleton Medical Center, Columbus School, Homeless Connections and other non-profit organizations. He especially loved all Wisconsin sports teams, and Wisconsin summers. He is grateful for God’s many blessings, especially the love and dedication of his wife Barb and their entire family.

If so inclined, please consider a memorial gift to the Faith Lutheran Endowment Fund for Music, the Appleton YMCA, or the Appleton Boychoir.

“Lord, I have loved being in your House, the place where your honor dwells.” Ps. 26:8

To order memorial trees or send flowers to the family in memory of Fred C. Pahl, please visit our flower store.