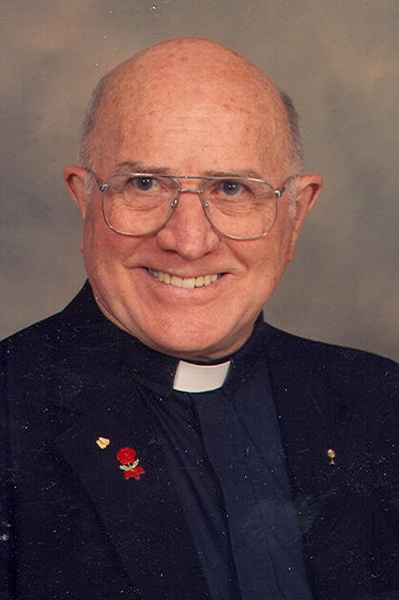 Fr. Peter E. Cops, 85, passed away on Monday, April 12, 2010 in Lacrosse. Fr. Peter was born in Nymegen, The Netherlands, on February 5, 1925. At an early age he entered the seminary staffed by members of the Congregation of the Blessed Sacrament. He joined the Blessed Sacrament Fathers, and was ordained to the priesthood, in Holland, on March 25, 1952. That summer he celebrated his First Mass at Sacred Heart Parish in Appleton. A few months later Fr. Pete went to be a missionary in Brazil, where he ministered for 18 years. When he came to the United States, he spent a number of years promoting devotion to Christ in the Blessed Sacrament. He traveled to a number of dioceses, where he assisted in establishing perpetual adoration. In his retirement, Fr. Pete lived in La Crosse with other retired priests, where he was lovingly cared for by John Neuman, and the Diocese. Fr. Pete is survived by 3 sisters; Mary Havinga, Annie (Ken) Schuh, Margie (Paul) Young, and four brothers; Eddie (Beverly) Cops, Fr. Augustine Cops, O.F. M. Capuchin, Gerald (Bernice) Cops, Henry (Joyce) Cops, and brother-in-law John (Ellie) Vincent, and 39 nieces and nephews and their families. He was preceded in death by his parents, Emund and Theodora Cops, three sisters, Nellie Van Nuland, Dorothy Van Nuland, and Josie Vincent and three brothers-in-law, Martin Van Nuland, Joseph Van Nuland, Peter “Bill” Havinga and a niece, Maria Herrmann.
A Mass of Christian Burial will be held on Thursday, April 15, 2010 at 11:00 AM at ST. PAUL CATHOLIC CHURCH (410 E. Wallace St. Combined Locks) with Fr. Augustine “Gus” Cops con-celebrating. A time of visitation will be held on Wednesday, April 14, 2010 from 4:00 until 7:00 PM at the Church and on Thursday from 10:00 AM until the time of Mass. A prayer service will be held on Wednesday at 7:00 PM at the Church. Burial will be in the Holy Name Cemetery. In lieu of flowers, a memorial has been set up within the Cops Foundation of Kimberly, to help feed the world's poor, and support Pro-Life causes.
Jansen Fargo Funeral Home
204 E. Kimberly Ave
Kimberly WI 54136
920-788-6202

To order memorial trees or send flowers to the family in memory of Fr. Peter Cops, please visit our flower store.