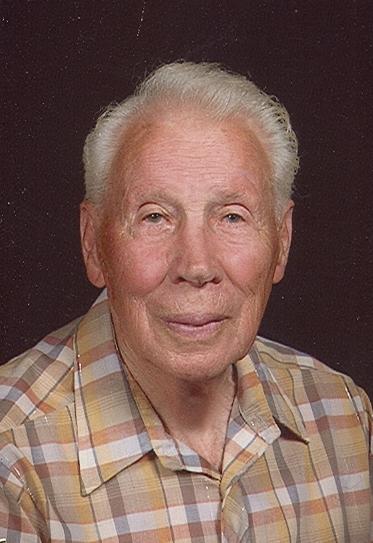 Everett E. Hahnemann, age 94 of Kaukauna, passed away on Tuesday, April 12, 2011. Everett was born on December 12, 1916, son of the late Edward and Rachel (Terry) Hahnemann. On August 31, 1946, he was married to Norma Jane Baker in Appleton. Everett proudly served in the United States Army during WWII from 1941 until 1945. He was stationed in Iceland, and then was in combat in Normandy, Northern France, and Rhineland. His many military decorations include the Victory WWII Medal, Army Occupation Medal, American Defense Service Medal, Good Conduct Medal, France Liberation Medal, and the European, African, and Middle Eastern Theater Medals, as well as three Battle Stars and an Arrowhead. Everett was a member of the VFW Post 3319 in Kaukauna for 67 years. After his service to his country, Everett worked as a mechanic at Thilmany's for 41 years, before retiring in 1979. He was a lifelong member of Immanuel United Church of Christ in Kaukauna.
Everett is survived by two sons, Dennis (Barbara) Hahnemann, Aberdeen, SD, and Randy (Joyce) Hahnemann, Kaukauna; granddaughters, Angela (Corey) Landeen, Pierre, SD, Ebony (Jason) Stadtmueller, Kaukauna, Nicole (Rick) Van Driel, Kaukauna, Stefanie (fiancé Cody Kasten) Hahnemann, and Amanda (special friend Jake Kohl) Hahnemann, Kaukauna; ten great-grandchildren, Brogan and Beritt Landeen, Rhiannon, Miley, Krista, Tamara and Adrianna Stadtmueller, Kyleigh and Jaxson Van Driel, and Cheyenne Kasten; two sisters, Bina Wallace, Menasha, and Kareta Kilgas, Kaukauna; and many other nieces, nephews, cousins, and friends.
He was further preceded in death by his wife, Norma; father and mother-in-law, John and Johanna Baker; sisters Artis, and Dorothy (Gordon) Champeau; brothers, Donald (Mildred) Hahnemann, and Kenneth (Frances) Hahnemann; and brother-in-law, Mark Kilgas, and Leslie Wallace.
The funeral service for Everett will be held at 11:00 a.m. on Tuesday, April 19, 2011, at IMMANUEL UNITED CHURCH OF CHRIST, 510 Sullivan Avenue, Kaukauna, with Rev. Melinda Feller officiating. Friends may call on Tuesday at the church from 9:00 a.m. until the time of the service. Interment will take place immediately following the service at Highland Memorial Park, Appleton.
The family would like to extend a sincere thank you to Stefanie for all of the extra TLC you gave Grandpa at the home. They would also like to thank Dr. Werner, Karla, and the staff at the Kaukauna Clinic, to Emily and the staff at Emerald Valley Assisted Living for all the care you gave Dad during his last few weeks, and the staff at Colony Oaks for the care given to him while he was there.

“Dad, you were always there when anyone needed a helping hand. You will be greatly missed by all of us.”

To order memorial trees or send flowers to the family in memory of Everett E. Hahnemann, please visit our flower store.