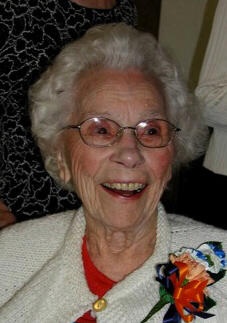 She was born on May 28, 1910, the 15th child of Julius and Emilie(Jeske) Bubolz of West Cicero Township, Wisconsin. She attended Cicero Grade School, graduated from West Green Bay High School,
attended Capital University (Columbus, Ohio) and graduated from Lawrence College in 1933 with a major degree in economics. She met her husband, Franklin C. Jesse, Sr., while attending Lawrence College.

They were married on June 17, 1934, and were married for 56 years. Ethel is survived by three of her four children, Ramona Jesse Steele(Thomas), Franklin C. Jesse, Jr. (Lucretia), and Marilyn Jesse Kaman (John), 13 grandchildren and 20 great-grandchildren.

She is preceded in death by her parents, Emilie and Julius Bubolz, 14 siblings, her husband and her daughter Virginia and son-in-law David Lyon, and two great-grandchildren.

Upon graduation, Ethel worked alongside her husband in the formation of Integrity Mutual Insurance Company where she undertook bookkeeping duties and other tasks to help the fledgling company, all without pay. With the birth of her first child, Ethel
became a full-time mother.

Ethel took immense joy in her children and in all of her extended family. She was active in the First Congregational United Church of Christ of Appleton, where she served as a deaconess and was a member of the senior fellowship. Ethel was a charter member of the Appleton Lion's Club Auxiliary and was a long-time member of the Appleton Women's Club. Ethel's hobbies included bridge, flower gardening and cooking, in which she excelled. Ethel had a generous,
compassionate and gracious spirit. She listened well and gave sound advice to those who asked. Her friends and family will miss her dearly.

A funeral service for Ethel will be held on Saturday, April 2, 2011 at the FIRST CONGREGATIONAL UNITED CHURCH OF CHRIST (724 East South River St.) at 11:00 AM. A time of visitation will be held on Friday, April 1, 2011 at the Wichmann Funeral Home from 5:00 PM until 8:00 PM and on Saturday from 10:00 AM until the time of services at the Church. In lieu of flowers memorials may be made to the First Congregational United Church of Christ.

To order memorial trees or send flowers to the family in memory of Ethel Helen Jesse, please visit our flower store.