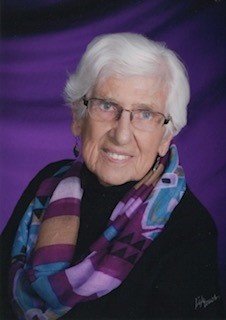 Esther Barry, age 93, passed away on January 2, 2022. Esther was born in Appleton on Jan. 9, 1928, to the late George W. and Sarah (Whealon) Otto. She was a lifelong resident of Appleton. She attended St. Joseph Grade School and graduated from St. Mary High School, Menasha in 1945. Esther was united in marriage to George W. Barry on October 20, 1951, sharing 44 years before his death on Dec. 2, 1995. She was a member of St. Joseph Catholic Church since birth, and in her adult life she served as a Minister of the Eucharist and as a Minister of the Word. In addition, she served on various committees through the years. She was an active volunteer and received awards in several community organizations. In younger years, Esther enjoyed bowling, cross-country skiing, golfing, knitting, sewing, and gardening. It was through these activities that she formed and maintained many friendships. She also formed meaningful bonds with the many four-legged friends she had through the decades: Cinder, Heidi, and Cozy, to name a few. She was a member of the St. Elizabeth Hospital Auxiliary, the Reach to Recovery program of the American Cancer Society, Girl Scouts, the Winnegamie Dog Club, and the Wisconsin English Springer Spaniel Club.

Esther is survived by her daughter and son-in-law, Ellen and Jim Weiland; her daughter-in-law, Therese Barry Tanner; her grandchildren, Benjamin (Laura) Weiland, Colleen Barry, Patrick (Maia Poling) Barry; her great-grandchildren, Adrian and Otto Barry; her brother-in-law and sister-in-law, Bob and Meg Barry; and her sister-in-law, Barbara Otto. She is further survived by many cousins and friends. Along with her husband and parents, she was preceded in death by her son, Tom Barry, in 1990; her sister, Ruth Van Bommel; Ruth’s husband, John Van Bommel; and her brothers, John Otto and George J. Otto.

Esther’s family is very grateful for the kind care she received from Guardians of Tomorrow, Frontida Memory Care of Kimberly, Compassus Hospice, and Home Instead Senior Care.

ALL IS WELL, SAFELY REST, GOD IS NIGH.

To order memorial trees or send flowers to the family in memory of Esther Barry, please visit our flower store.