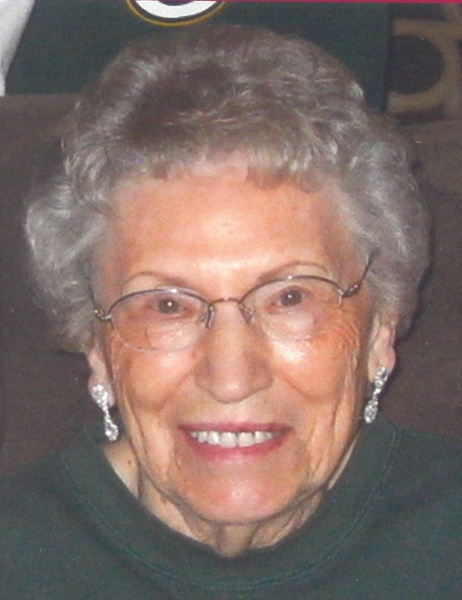 She was born to Fred and Martha Klipfel on November 15, 1923, in McIntosh County, North Dakota. Esther married the late Leonard Jurgensen in March of 1944 in Green Bay, Wisconsin.

Esther was a loving wife, mother, grandmother, great grandmother, sister, and friend. While she considered herself shy, she loved talking with people and being part of any gathering. She spent many happy hours cheering on the Packers with family and friends. It seemed like Esther made a special place in her heart for each family member, new friends and old. Esther was loved by so many and will be deeply missed by her family and those who knew her.

Esther was one of the hardest working people you could find. She left her family home at the age of 14 and worked in markets, restaurants, and finally Appleton Wire Works and Albany International. While working full time, Esther also took complete care of Lenny, keeping him at home after he contracted Multiple Sclerosis in 1958. She also cared for Nick when he sustained a traumatic brain injury. Esther was our angel on earth.

Esther was a life long learner. After her retirement, she became an accomplished quilter, spending many hours in class with other quilters and at home finishing her projects. She was also determined to graduate from high school. For years she enrolled in one course each semester and in June 1999, she became a proud recipient of her G.E.D.

Visitation will be held on Thursday, June 16, 2022, at the Wichmann Funeral Home, Tri-County Chapel,1592 Oneida Street, Menasha from 10-12 with a Celebration of Life immediately following.

To order memorial trees or send flowers to the family in memory of Esther Jurgensen, please visit our flower store.