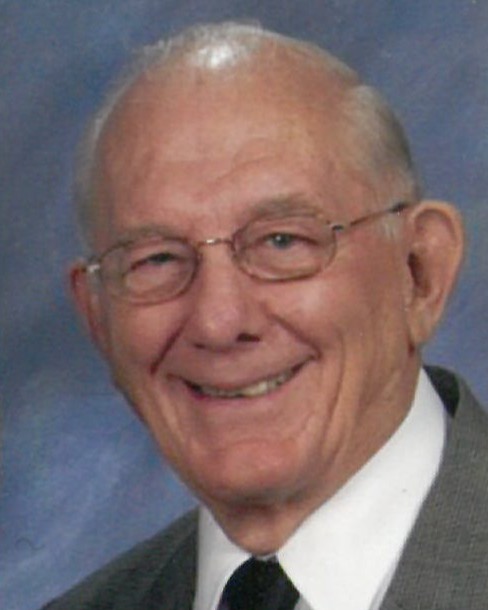 Erwin J. Dorow Jr age 91 passed away at his home in Appleton on December 6, 2022, surrounded by the love of his family. Erwin was born March 23, 1931, to Erwin Sr and Caroline (Schneider) Dorow in Dale, WI. He graduated from New London High School. On October 31, 1953, Erwin and Janet married and spent the next 56 years together raising a family. Following their marriage, the couple moved to “the big city” of Appleton and raised their family.
Erwin worked as a pin setter early in his life and escaped pin shots in the alleys! He worked as a delivery driver for Foremost Foods and also served as one of their maintenance men.
Erwin enjoyed traveling with his wife, and together they travelled all over the country- and they visited 49 of the fifty states. He enjoyed doing puzzles, dancing (especially polkas) gardening and woodworking - and as a couple they loved to spend time with their family and friends.   For two summers, Erwin and Janet travelled on a tour bus with the Tuba Dan Band-because they loved polka music so much.
Erwin is survived by his children: Kurt (Kay) Dorow of Kaukauna and Patricia (Andy Gaines) Voss of Almond; grandchildren: Tammy (John) Bellin, Lucas (Kira Lee) Dorow, Baylee (Alexander Mummery) Voss, Logan (Morgan) Dorow, and Blake (Angie) Voss; and great grandchildren: Marshall Bellin, Lennon, and Scarlett Dorow. He is further survived by siblings: Caroline (Dennis) Laabs, Violet Litton, Velma (Dale) Stofferahn, Leroy (Sally) Dorow and sister-in-law Edith Dorow.
Waiting to greet Erwin at the gates of heaven were his beloved wife Janet, his parents, Janet’s parents Ben and Frida (Ploetz) Rhode and siblings Lawrence Dorow, Ralph (Elaine) Dorow, and brother-in-law Dorman Litton. In addition, many friends, family, and former dancing partners met him with their dancing shoes on.
A funeral service for Erwin will be held Sunday December 18, 2022, at 3:00pm at Wichmann Funeral Home 537 N Superior Street, Appleton. Friends and family may gather at the funeral home from 1:00pm until the start of the service. Erwin will be laid to rest next to his beloved at Highland Memorial Park in Appleton.
To order memorial trees or send flowers to the family in memory of Erwin J. Dorow Jr., please visit our flower store.