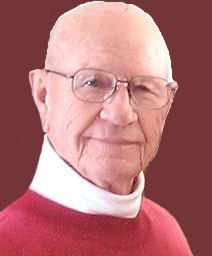 Emmett Hoks, age 89, passed away peacefully at his home on Wednesday evening, October 30, 2013, following a brief illness. His loving family was at his side. Emmett was born on April 23, 1924, in Menasha, son of the late Dan and Delcena (Debroux) Hoks. Following his graduation from St. Mary's High School in Menasha, he served his country as a member of the United States Navy during World War II. On June 12, 1947, he married Georgiann M. Stilp, and together the couple raised seven children. They were married for forty-six wonderful years until Georgiann's death in 1993. On November 25, 1994, he married Elinor Alt.

He loved golf, photography, and was an avid fan of the Chicago Cubs and the Green Bay Packers. He was also a member of the Appleton Evening Lions Club, the Outagamie County Historical Society and was involved in the Attic Theatre. On July 27, 2011, he was honored to be able to be part of the Old Glory Honor Flight.

A funeral liturgy to celebrate Emmett's life will be held at 11:00 AM on Monday, November 4, 2013 at ST. MARY CATHOLIC CHURCH, 312 S. State Street in Appleton, with Fr. Dan Felton, a family friend and former student, officiating. Interment will follow in St. Mary's Cemetery, Menasha. Family and friends will gather at the Wichmann Funeral Home, Tri County Chapel, 1592 Oneida Street in Menasha on Sunday afternoon from 3:00 PM until 7:00 PM, and again at the church on Monday morning from 9:30 AM until the time of the service. Online condolences may be offered at www.wichmannfargo.com.

In memory of Emmett, a fund has been established in his name, OR you may contribute to www.oldgloryhonorflight.com.

The family would like to offer their sincere thanks to ThedaCare At Home Hospice, especially Erin and Todd, and everyone at Heritage Assisted Living. We will never forget your kindness to our family.

To order memorial trees or send flowers to the family in memory of Emmett Hoks, please visit our flower store.