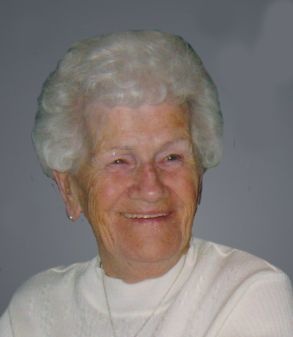 A kind, gentle, happy and loving soul, Elizabeth Bons Kelderman died peacefully in the company of her family on May 16, 2016.

Mother of 12, grandmother to 17 and great grandmother to 17, she was the touchstone of an extended family that loved her dearly, admired her more and endeavored to live by her selfless example.

She was the first born in a family of 11 in the Netherlands shortly after the end of World War I and with will and bravery endured the great depression that followed, the invasion of Holland in WWII, the subsequent capture and imprisonment of her husband Jacob and the years of depravation that war brings.

With their eight children she and Jacob immigrated to the Fox River Valley in 1954 and saw the family grow to 12, only for Jacob to die in 1969. Thereafter she would support and look after her family with the same grace, selfless purpose and determination that characterized her entire life, though never losing the gentle and kind touch that all who have ever met and known her recognized instantly.

In her earlier years “Betty” enjoyed travel with her sister Coby, a round of golf with her brothers John and Hank and summer picnics with friends and family. In her later years she especially enjoyed local trips and rides in the country with her eldest daughter Maria, who cared for her with loving dedication.

Above all, however, she enjoyed time with her extended family, watching each and every one of them grow and prosper. No birthday or major life event ever passed where she didn't send a card with a touching note of love and her signature salutation “and have a nice day.” No family reunion ever occurred where she didn't beam with pride and the comment from her that “Dad would have been so proud.”
To be around her was to be held in a tender and joyful embrace. One we will never forget.

The funeral liturgy for Elizabeth will be held at 12:00 Noon on Thursday, May 19, 2016 at HOLY SPIRIT PARISH, 600 E. Kimberly Avenue, with Fr. Robert Kollath officiating. Interment will follow in the parish cemetery. Family and friends are welcomed to gather at the church in Kimberly on Thursday morning from 10:00 AM until the time of the service.

To order memorial trees or send flowers to the family in memory of Elizabeth M. Kelderman, please visit our flower store.