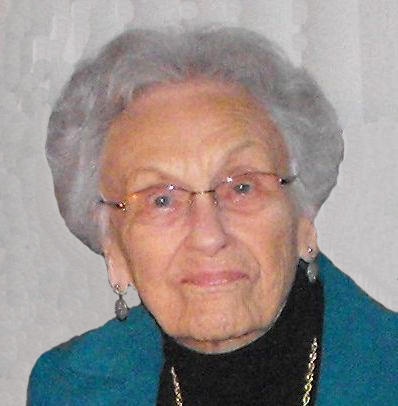 Betty Bruehl, 89, Kaukauna, passed away on Sunday, May 13, 2012 at Appleton Medical Center. She was born in Appleton on May 2, 1923, to Alex and Margaret (Reith) Maley. Betty grew up in Kaukauna and married Carl Bruehl on Valentine's Day, February 14, 1943 at Fort Pierce, Florida before Carl left for WWII. When he returned, they made their home in Kaukauna and raised three children in the house where she lived until her passing. They were fortunate enough to celebrate 65 years of marriage before Carl passed away on November 6, 2008.

Before retiring, Betty worked for many years at the former Bohl & Maeser Shoe Store in downtown Appleton, where she especially enjoyed fitting babies with their first pair of shoes. She and Carl enjoyed 30 years of summers at their cottage on the Oconto River near Chute Pond and several winters in Gulf Shores, Alabama. In her later years, she enjoyed a good shopping trip — which usually included stopping for lunch — and socializing and playing cards with her many friends and cousins. Betty was an excellent baker and loved to share what she made with others.

The memorial mass for Betty will be held at 11:00 a.m. on Wednesday, May 16, 2012 at Holy Cross Catholic Church, 309 Desnoyer Street, Kaukauna with Father Tom Pomeroy officiating. Friends will be received at the church from 9:00 a.m. until the time of mass. Interment will be in Holy Cross Cemetery. In lieu of flowers, a memorial is being established in her name. Online condolences can be expressed at www.wichmannfargo.com.

The family wishes to thank the many wonderful staff members on the cardiac floor at Appleton Medical Center, as well as Betty's long-time primary care physician, Dr. Brian Scott, and the Affinity Clinic staff in Little Chute for their care of her over the years.

To order memorial trees or send flowers to the family in memory of Elizabeth "Betty" Bruehl, please visit our flower store.