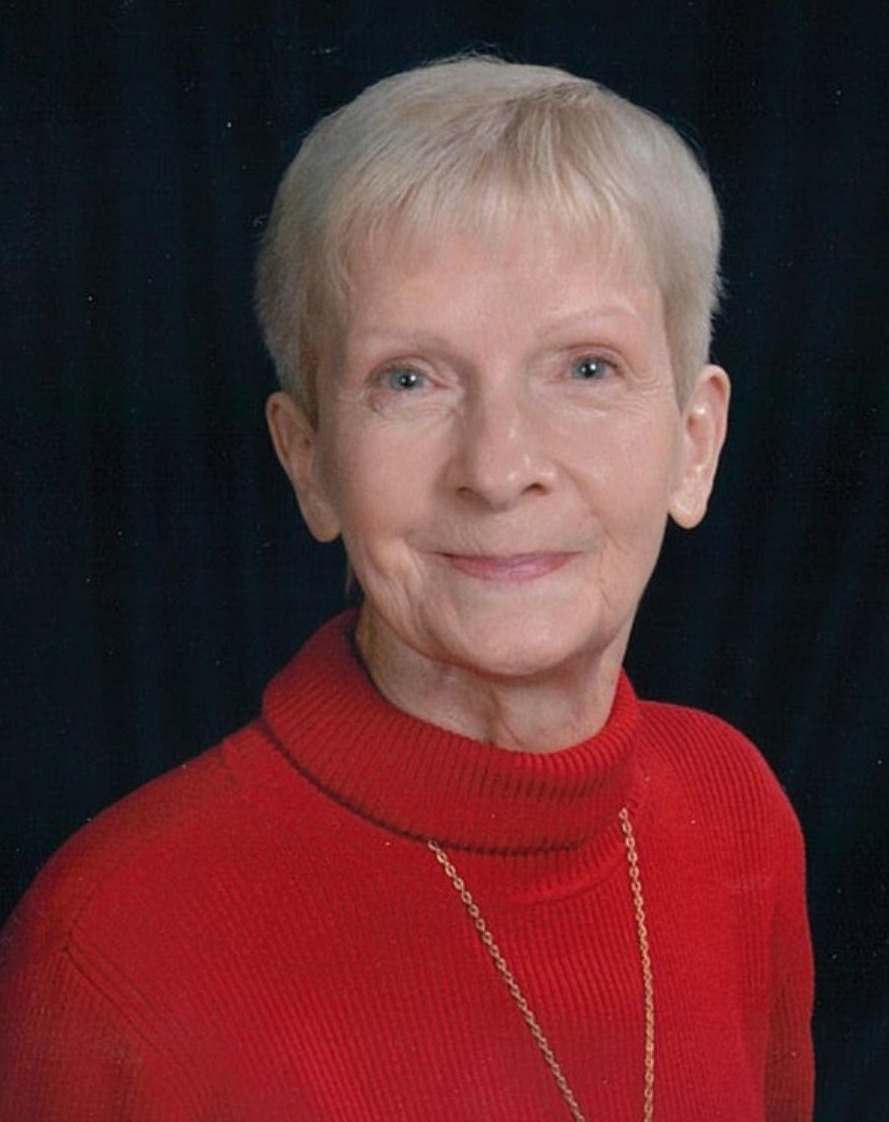 Elaine I. Charlesworth, age 87, of Appleton Wisconsin passed away peacefully on December 31, 2022.  She was born on June 16, 1935 in Waukegan, Illinois to the late Milton J. Nystrom and Ione G. (Holmquist) Nystrom.  She was the second of six children born to the couple.

She attended Lincoln-McAlister Grade school and Waukegan Township High School graduating with honors in 1953.  She began piano lessons in grade school and accompanied many individuals and groups throughout her school years.  She earned her piano lessons by working part-time as a studio pianist for dancing classes.

While in high school she sang in the elite Treble Clef Club and served as an accompanist on the piano, attending many competitions and appearing in school shows.  She was also chosen for the swim (Dolphin) club and was elected to be an honorary ROTC sponsor based on grades and activities.  During her sophomore and junior years, she worked after school and on weekends at the Post Exchange at Great Lakes Naval Training Center.  She was elected to the National Honor Society in scholastics and graduated in the upper 10% of her class in 1953.

Throughout her life she was active in her church.  As a child and young adult, she attended the Swedish Lutheran Church in Waukegan, Illinois where she was baptized, confirmed, and married.  She also sang in the choirs, accompanied the choirs and Sunday school programs on the piano and taught Sunday School.  She attended the Augustana Church Camp in Lake Geneva, Wisconsin many years in the summers and was a member of the Lutheran League, traveling to many state conventions.

Eager to make her way in the world, she chose to go to work rather than to attend college as her siblings did.  While working in the Personnel Office at Fort Sheridan Illinios, she met her husband-to-be, United States Army Lt. Frank M. (Bud) Charlesworth on a blind date.  They married at the Trinity Lutheran Church (Formerly the Swedish Lutheran Church) on August 25, 1956 and moved to a small duplex in the Town of Menasha, Wisconsin and joined the Trinity Lutheran Church in Appleton.  She was hired by the Hoffman company and began in the office at Valley Fair Shopping Center, moving to the company office on Northland Avenue.

Bud and Elaine had their house built in the Town of Grand Chute in 1960 and their first child, Jill was born in 1961, followed by Jeffrey in 1964 and Bradley in 1965.  All were baptized at the Trinity Lutheran Church in Appleton.

When Our Savior's Lutheran Church was built on Meade Street in 1965, they transformed and became members in early 1966.  Elaine and Bud remained active members throughout their lives.  Elaine served in many capacities throughout the years: Neighborhood Nursery School Registrar and Treasurer, Junior Choir co-director, Vietnamese Refugee Committee co-president, Director of volunteers for services and assistant pianist at the nursing home adjacent to the church, chairperson, and later as member of the Herald committee, an usher, communion assistant, greater, counter, and alter preparations.

After 10 years as a stay-at-home mom, Elaine began part-time employment at Prangeway.  She worked in customer services in the evening s and weekends for 5 years and then as a bookkeeper at Schutz Oil Co. for 8 years.  She then joined U.S. Cable Inc. as a bookkeeper and retired 13 and a half years later after becoming the office supervisor and secretary/treasurer of the corporation.  She was the first female elected to the Board of Directors.

Eager to continue learning, she attended Fox Valley Technical College and spent one year learning to apply her accounting skills on the computer.  She was on the Dean's list both semesters and awarded the FVTC Star Award.

With Bud in retirement, they began traveling to Mexico and many of the Caribbean Islands such as (Cancun, Cozumel, Grand Cayman, St. Marten, Aruba, Bonaire, and Curacao) where Bud enjoyed scuba diving and they both enjoyed snorkeling.  They also visited many "signature" cities with Elderhostel groups including New Orleans, Las Vegas, San Francisco, St. Augustine, Chicago, New York City, Washington D.C., and Williamsburg VA.  A trip to their honeymoom resort Cleveland's House on Lake Rosseau in Minett, Muskoka, Ontario, Canada topped them all!  They wintered in Haines City, Florida and had "the best of both worlds" according to Elaine.

She was proceeded in death by her parents, brothers Donald (Gloria) and Duane (Helen), and Husband Frank "Bud" Charlesworth.

She is survived by her children and grandchildren: Daughter Jill (Warren) Armitage, Cole and Sarah of Appleton; her son Jeffrey (Michele) Charlesworth, Duncan and Payton of Mahtomedi Minnesota; and her son Bradley Charlesworth of Colorado.

A memorial service to celebrate the life of Elaine will be held at 11:00 AM on Saturday, January 14, 2023, at Our Saviour's Lutheran  Church, located at 3009 N. Meade Street in Appleton.  Rev. Dr. Niveen Sarras will officiate and private burial will take place at Kelso Cemetery in Kaukauna.   Visitation will be held at the church on Saturday from 9:00 AM until the time of the service.

To my husband-Goodnight, true love

To order memorial trees or send flowers to the family in memory of Elaine I. Charlesworth, please visit our flower store.