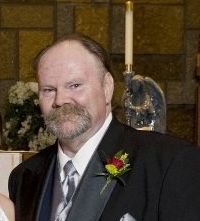 Late last night on August 28, 2018, surrounded by his family, we lost the best dad and brother in the world, Ed Fineran, due to his short battle with stage four lung cancer. He went peacefully and painlessly. He was a really tough fighter and gave it his all, showing no pain, just to be around a little longer for his family.

I am happy to say that he did have a short few months this year where he felt great and was able to get out and on his own and be independent and free before losing his battle. One little last hurrah for my dad… I'll never forget getting home from my work trip to Denver just a few weeks ago and him picking me up from the airport and us going to Olive Garden together. It was as if he didn't have any disease at all holding him back. Besides his grandkids and family, there was nothing better to him than jumping in his Jeep and taking a long drive.

He loved and adored his grandkids, his three kids, his two brothers, and family. Ed is survived by his children; Jason (Heather), Eric (Stacy), and Claire (Ryan), grandchildren Gabriel, Kianna, Corbin, Kyah, Alivay, Mariya, and Noah, his brothers Michael (Dee) and Bill (LuAnn), and nieces and nephews; Christine, Michelle, Kelly, and Patrick. Special mention to his Grand-dog Josie.

Ed is preceded in death by his parents up in heaven, William and Claire Fineran.

I could spend hours telling you funny and heart warming stories of my dad, but I don't think I can fit that many characters in here. I don't know what I'll do with all my spare time, Dad, but I sure as heck promise to be kind and ALWAYS funny like you. The Fineran's will make sure to keep your memory alive, and your funny jokes going.

Memorial visitation will be held on Friday, September 7th, 2018 at WIchmann Funeral Home, 537 N. Superior Street, from 5:00 PM to 7:00 PM, with a funeral service at 7:00 PM. Ed will be laid to rest privately at a later date. There will be a memorial fund established in Ed's name.

To order memorial trees or send flowers to the family in memory of Edward V. Fineran, please visit our flower store.