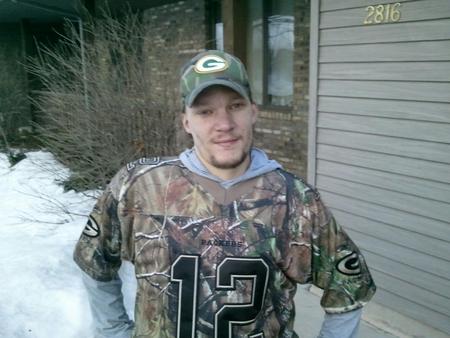 Douglas (Doug) J. Mueller, age 38, of Sherwood, died on December 31, 2011 after a short illness due to a congenital heart defect, surrounded by family and friends. Doug was born February 14, 1973 in Chilton, the son of Joseph W. and Peggy L. Mueller. Doug grew up in Sherwood, was third of ten children and graduated from Kaukauna High School in 1991. Doug also was an avid sports fan, especially of the Packers, Brewers, Bucks, and Badgers, and renowned for his knowledge of sports statistics. Doug loved going to Miller Park and playing blackjack.

He was preceded in death by his nephew, Keegan Jahnke; grandfather, Joseph A. Mueller and uncle, Michael P. Mueller.

The funeral liturgy for Doug will be held at 11:00 am on Wednesday, January 4, 2012 at SACRED HEART CATHOLIC CHURCH, N341 Military Road, Sherwood. Fr. Michael Betley offiating. Inurnment will take place at the parish cemetery. The visitation will be held at the Fargo Funeral Home on Tuesday from 4:00 until 8:00 pm with a prayer service at 7:00 pm. Visitation again at the church from 10:00 am until time of mass.

The family would like to thank the staff at Appleton Medical Center ICU for their compassionate care and Kaukauna Fire & Rescue for their efforts.

To order memorial trees or send flowers to the family in memory of Douglas J. "Doug" Mueller, please visit our flower store.