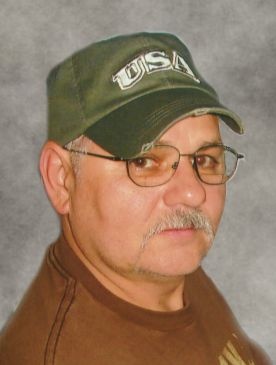 Doug Clements, age 65 of Appleton, passed away on Tuesday, March 20, 2018. Doug was born in Escanaba, Michigan on July 5, 1952, and grew up on the Potawatomi Hannahville Indian Reservation. He was the son of the late Wilfred and Stella (Meshigaud) Clements. While stationed at Fort Hood, Texas, he married his wife Stephanie on July 28, 1977. Doug served in the United States Army during the Vietnam War as an executive chef at Fort Hood, Texas. He also served in Germany and Panama and was discharged in 1979. Most recently, he was a highly regarded maintenance employee for Premier Real Estate. Doug enjoyed crafting, cooking, keeping busy repurposing reclaimed wood and household items, and hanging out with his family at the cabin or the campground. Doug also loved watching the Packers and other sporting events, and faithfully attended the football, basketball, and soccer events that his six grandkids participated in. Doug enjoyed the company of his friends and family and was loved by all, but he especially loved the special opportunities for doting on his grandchildren.

A Celebration of Life for Doug will be held on Saturday, March 24, 2018, beginning at 9:00 AM, at the Wichmann Funeral Home, 537 N. Superior Street in Appleton. A prayer service will be held at 11:00 AM, and the celebration will continue afterwards.

The family would like to thank the many caregivers for their love and concern for Doug. They include everyone at Grand Horizons, ThedaCare At Home Hospice, and the Ascension Cancer Center at St. Elizabeth Hospital. We will never forget your kindness.

To order memorial trees or send flowers to the family in memory of Doug "Buckshot" Clements, please visit our flower store.