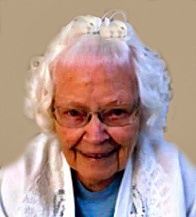 Dorothy K. Pozolinski, 98, of Menasha, WI, entered eternal life on Sunday, June 27, 2021, at her home at Gardens of Fountain Way in Menasha, WI.

Dorothy was born on February 24, 1923, to the late Walter and Valeria Kaczmarek.  She grew up in Menasha, WI, where she lived a faithful life.  Dorothy received all of her sacraments and was a Eucharistic minister at St. John the Baptist Catholic Church.  On January 26, 1946, she married Edward Pozolinski.  They were married for 57 years until Edward’s passing in October of 2003.  Together they had three wonderful daughters: Barbara, Janice, and Laurie.

Dorothy lived a life centered around her strong faith and family.  She said prayers for others on a daily basis and even led the rosary for her friends at Gardens of Fountain Way.  She enjoyed making home cooked meals, taking trips to the casino, cheering on the Chicago Cubs, knitting intricate afghans and scarves, embroidering dish towels and pillowcases, savoring a piece of chocolate, and sharing a treat with anyone who visited her.  Most importantly, Dorothy was always present for her family.  She never forgot a birthday or special occasion, and she always took time to make each of us feel special.

Dorothy is survived by her daughters, Jan (Jay) Clark and Laurie Mayer (Todd Winarski), as well as her son-in-law Jim (Linda) Poquette.  She is further survived by six grandchildren and ten great grandchildren.  Dorothy’s grandchildren who loved her so, are Kris (Dan) Kuiper, Michelle (Gary) Stevens, Kim (Kevin) Farr, Todd (Jess) Schuette, Adam (Andrea) Shea, and Samantha (Bryan) Engleson.  She will be missed by her great grandchildren: Arianna and Bryson Kuiper; Gary and Ambriel Stevens; Madison, Ethan, and Gabrielle Farr; Sadie and Schuyler Schuette; and Lillian Engleson.  Other survivors include her sister, Lucille Patton, as well as many nieces, nephews, and friends.

In addition to her husband, Ed (Pozzy), she was further preceded in death by a daughter: Barb Poquette; a son-in-law, Patrick Mayer; a grandson, Zachary Shea; a great granddaughter, Elliana Kuiper; a brother and sister-in law, Larry and Clarice Kaczmarek; brother and sister-in-laws, Bernie and Virgie Pozolinski, Mary and Glenn Sturm, as well as Joe Patton; and a godson, Ron Kaczmarek.

Dorothy’s family would like to express a heartfelt thank you to the caregivers (her kids and Grandma) at Gardens of Fountain Way who treated her like family and made each day better for her.

God saw she was getting tired,

And a cure was not to be,

So He put his arms around her,

And he whispered, “Come with Me.”

With tearful eyes we watched,

As we saw her fade away.

And though we loved her dearly,

We could not make her stay.

God broke our hearts to prove to us,

He only takes the best.

We were blessed with the best!  You have taught us to work, pray, and love hard.  Our hearts will miss you, but we will keep your memory in our hearts and your stories carried on.  We love you!!!

Please leave a special message or condolences for Dorothy’s family below.

To order memorial trees or send flowers to the family in memory of Dorothy Pozolinski, please visit our flower store.