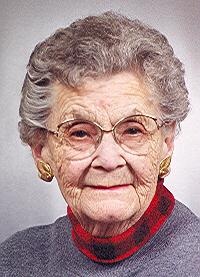 Dorothy I. Eggert, age 95, of Appleton, died Wednesday afternoon, September 20. 2006, at Rennes Health Care Center. She was born May 29, 1911 to the late Herman and Sadie (Lenzner) Rehfeldt, in Appleton, where she was a resident all of her life. Following her graduation from Appleton High School in 1929, Dorothy was employed by Appleton Coated Papers. She married Norman F. ‚ÄúBaldy‚Äù Eggert on August 17, 1931, they were married for 55 years; he preceded her in death November 3, 1986. Following her marriage, Dorothy, was employed by Fusfield‚Äôs Women‚Äôs Clothing and then by Nadel‚Äôs Women‚Äôs Clothing. Dorothy was a member of Zion Lutheran Church. Next to her family and church, Dorothy loved people. She cared about them and she cared for them. Dorothy was known as the ‚ÄúCookie Lady‚Äù at Zion‚Äôs Vacation Bible School for many years. She became a friend to all as she served refreshments to the fans at Appleton American Legion baseball games. She was an avid sport fan for many, many years. Her neighbors became an extended family to her as she helped them through the years. Baking cookies was her specialty. She visited Rennes Health Center weekly for six years and brought cookies with her for the residents. She enjoyed the friendship of the employees of Piggly Wiggly and often brought them cookies. Her grandchildren and great grandchildren will always remember the cookie jar at ‚ÄúGrandma Dorothy‚Äôs‚Äù.
Survivors include her daughter and son-in-law, Joan and Don Hawkins; her grandchildren, Steve (Joan) Hawkins, Sue Hawkins, Julie Wockenfus, Lori (Dave) Eastman; six great grandchildren, Brian Henry, Elizabeth Wockenfus, Samantha Wockenfus, Brittany Henry, Kayla Eastman and Drew Eastman; two great great grandchildren, Chloe and Cliff Sundquist, newly born twins, also helped fill her life. She is further survived by her sister-in-law, Donna Schmidt; nieces and nephews, Reverend Richard (Cathy) Rehfeldt, Donna Rehfeldt, Beverly (Henry) Yunk, Sharon (Dave) Brodzinski, and Jerry (Joan) Schmidt and other relatives and friends. She was preceded in death by her husband, parents, a brother, Howard and his wife Nina and many sisters and brothers-in-law.
Funeral services for Dorothy will be held at 11:00 am, Monday, September 25, 2006, at ZION LUTHERAN CHURCH, 912 North Oneida Street, with Reverend Wendy Wirth-Brock officiating and Reverend Rehfeldt (her nephew) will preach the sermon. Burial will be in Appleton Highland Memorial Park. Friends may call at the funeral home on Sunday from 4 to 8 pm and on Monday at the church from 9:30 am, until the time of the service. A memorial fund is being established. You are all invited to have lunch at the Appleton American Legion Club following the committal services at the cemetery

The family would like to thank the owners and staff of Living Tree Estates for making Dorothy feel so comfortable during her final months. She loved you all. Thanks also to the staff of Rennes Health Center, who in her final weeks of life, made Dorothy feel special.

To order memorial trees or send flowers to the family in memory of Dorothy Eggert, please visit our flower store.