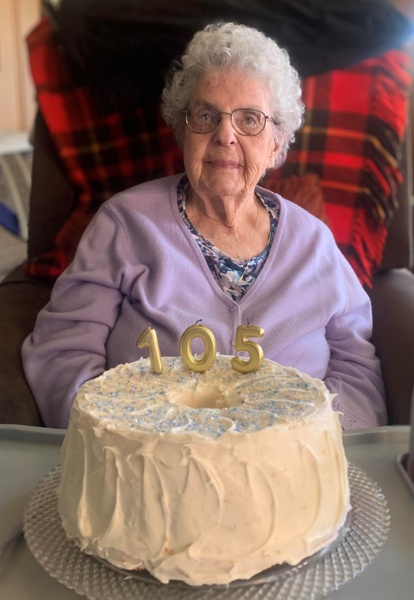 Dorothy Defferding, age 105 of Appleton, passed away peacefully at her home with family at her side.  She was born in Birnamwood on April 25, 1916, daughter of the late Max and Ella (Teichen) Hentschel.  Being raised on a farm, she worked closely with her dad on daily chores in the barn and in the fields and woods.

As a young woman, she and her sister Virginia went to Chicago to work as domestic helpers in the same household.  She met her future husband Robert on a cherry picking trip to Door County.  He had forgotten his lunch, so Dorothy shared her lunch with him, and a romance was born.  They married on July 29, 1943, and were lifelong residents of Appleton. During the war years, Bob served in the United States Army, and back home Dorothy got a job welding superchargers for airplane engines!

Being handy turned out to be helpful – she helped Robert build a home on Clark Street. She and Robert worked as a team in whatever project was at hand. As a young mother she stayed home with the kids where she had a keen ear for the cookie jar! She was involved with the Brownies and Girl Scouts and also assisted the school nurses with hearing clinics and vaccination programs.

She loved crafts and hobbies: knitting, crossword puzzles, chair caning, jigsaw puzzles, oil paint-by-number, sewing and other crafts.  In her later years, she used her iPad for playing solitaire and other games.

Bob and Dorothy were also well traveled.  She fondly recalled trips to the farm and the cottage in Rhinelander.  Christmas at the farm was one of her favorite memories. They also visited other countries including Germany, Switzerland, Fiji Islands, Australia, New Zealand, Canada, and the Cayman Islands.  They also saw Alaska, Las Vegas and Florida, and flew to Hawaii to build a house for their niece!

She enjoyed watching golf, following the Brewers and the Packers, taking a motorhome road trip around Lake Superior, and making annual trips to New Hampshire in the fall.  Dorothy was a longtime member of Zion Lutheran Church where she helped serve funeral meals, went to bible study, was a money counter, and was always up on church happenings.  She was supportive and stood at Bob’s side when he was church president and when he served as engineer for the Zion Mutual Homes project.  She stayed active for many years and didn’t give up her driver’s license until she was 99.

She was preceded in death by her parents, husband, daughter Karen Schulz, and great-grandson Naeciwat.

The funeral service for Dorothy will be held at 11:00 AM on Thursday, January 13, 2022 at Zion Lutheran Church, located at 912 N. Oneida Street in Appleton, with Rev. Catherine Burnette officiating.  Burial will take place at Highland Memorial Park.   Friends may call directly at the church on Thursday morning from 9:00 AM until the time of the service.

The family would like to offer their thanks to Dorothy’s special caregivers Debbie, Sarah, and Marie. Thank you also to Heartland Hospice nurse Julie for her compassionate care of Dorothy. We will always remember what you have done for our family.

To order memorial trees or send flowers to the family in memory of Dorothy E. Defferding, please visit our flower store.