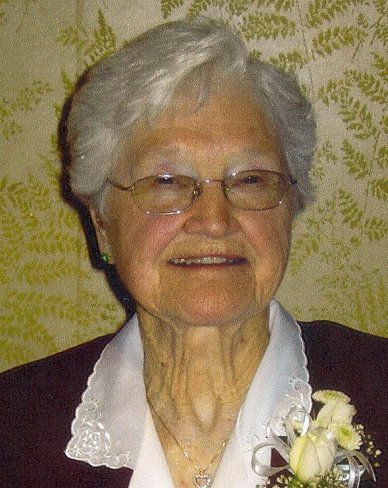 Dorothy was born on May 4, 1919 to Nicholas and Mary (Korty) Timmers. On October 24, 1948 she was united in marriage to Marvin Siebers and they spent 44 wonderful years. Together they adopted two children then six and 14 months and were wonderful and loving parents. Dot was devote in her faith, never prideful, led by example and preferred to work quietly in the back ground drawing no attention to herself. She was an active member of Holy Cross Parish and School in Kaukauna, over the years she was a member of the Christian Women, did bookwork for the school office, worked in the library, sang in the Queen of Peace Choir, was part of their prayer chain and volunteered at a homeless shelter. Dot was a Knights of Columbus Lady, part of the Foresters Investment group and was honored for donating 17 gallons of blood to the Red Cross. She loved sports, playing basketball in high school, bowling and golfing in women's and couples leagues with her husband. Dot challenged herself throughout her life with her own dark room, learning to play slide guitar, sewing items from her swimsuits to suits for herself with a matching tie for her husband. She was a meticulous bookkeeper and earned her certificate in tax preparation form Appleton Technical School. She loved to knit and crochet, making countless afghans, sweaters, baby blankets for church and loved crafting with a family group called the “Knit Pickers”.

The funeral liturgy for Dorothy will be held on Saturday, October 29, 2016 at 11:00 AM at ST. KATHARINE DREXEL, ST. MARY CHURCH, 119 W. 7th St. A time of visitation will be held on Saturday from 9:00 AM until the time of the service at the church. Interment will be in the Holy Cross Cemetery. Online condolences may be expressed at www.wichmannfargo.com.

The family would like to thank Dorothy's family and friends who were always faithful visitors and especially while she lived at the Golden Venture apartments in Kaukauna as well as the special ladies from Right At Home who's help kept her as independent as possible. The night sky shines a little brighter with its newest angel Dorothy.

To order memorial trees or send flowers to the family in memory of Dorothy "Dot" Siebers, please visit our flower store.