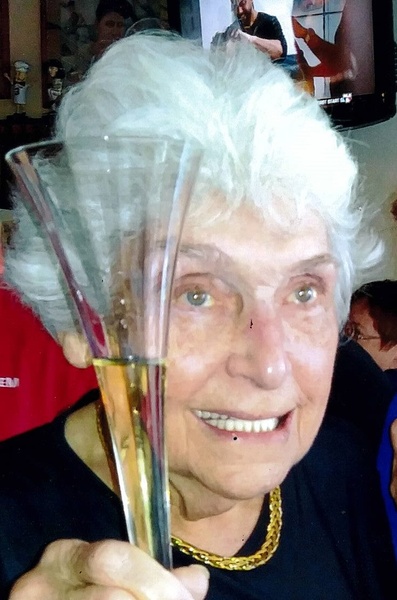 Doris Szymanski age 88 passed away peacefully Sunday evening Oct 3 at Theda Clark Hospital of Neenah. Doris was a proud mother, grandmother & great grandmother. She owned and operated Club Liquor in Menasha from 1971 until March of 2020 when she suffered a broken hip and had to retire.
Doris was well known in the community, loved and adored by many. She had a love for wine and that knowledge led her to being well known in the wine & liquor industry winning several awards recognizing her accomplishments in running the liquor store. She started the liquor store ahead of her time and had great foresight to build the store from ground up. Doris loved to travel out to Napa Valley in California and tour the wine country.
Before starting the liquor store she co-owned Club Tavern with Richard. In addition to her duties running the liquor store she cooked for the Tavern many years. Known for her wit & endless stories from her life & community. Customers loved coming into the store just to talk & listen to her stories. . Interests included cooking, wine, botany displays, cats, coffee and politics. We will all miss her dearly.
She was preceded in death by her husband Richard Szymanski, brother Ronald Dietz, parents Melvin & Hattie Dietz & nephews Jeff, Steven, Richard & Eric Dietz. She is survived by daughter Susan (Bill) Reuter, daughter Cheryl (Gilbert) Niemuth, son Rich (Kellie) & son Steven (LeeAnn). Grandchildren Tyler (Ashley) Szymanski & Trevor (Cassie) Szymanski. Greatgrandchildren Cora & Hudson Szymanski. Special niece Deborah Dietz.
The family will be holding a private funeral by invitation only on Thursday from 11am to 1pm with service & burial to follow.

To order memorial trees or send flowers to the family in memory of Doris Szymanski, please visit our flower store.