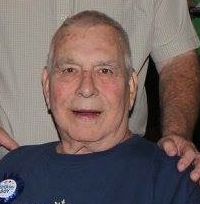 Called home to the Lord on December 15, 2017 at the age of 81 at Brewster Village. Don was born on August 20, 1936 in Oshkosh, Wisconsin to John and Ida Gunther. Don attended and graduated from Oshkosh High School. After high school, Don was drafted in the U.S. Army, where he helped build portions of the Berlin Wall. Don was employed at Leach Company for 35 years. Don married Lois Dorschner, who passed away in 1989. Don was then joined in marriage to Sandy in 1991.

Visitation will be held at Riverview Evangelical Lutheran Church, 136 W. Seymour St, Appleton, on Tuesday December 19, from 10:00 Am to 12 Noon. Funeral services at 12 Noon with Pastor Dennis Belter officiating. Entombment at Highland Memorial Park. In lieu of flowers, memorials to Riverview Evangelical Lutheran Church in Don’s name are appreciated. Don’s family would like to thank the staff at Cinder’s on Wisconsin Avenue for their care and support during his Thursday visits, the staff at Brewster Village, and Cindy of ThedaCare at Home Hospice for their care and concern.

To order memorial trees or send flowers to the family in memory of Donald W. "Don" Gunther, please visit our flower store.