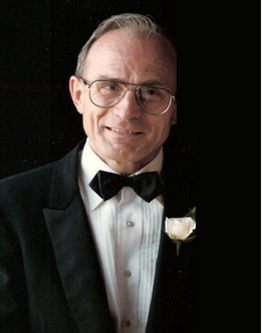 On Monday morning, September 24, Donald B. Witeck, 89, passed away peacefully with his loving wife of 62 years by his side.

Donald was born in Oconto on April 27, 1929, to Joseph and Leslie (Juneau) Witeck. At Oconto High School, he lettered in football and basketball and was senior class president. After graduating from Marquette University, he joined the Army and served with distinction for two years at Fort Meade and other stateside bases.

On June 30, 1956, Donald was united in marriage to Agnes Jochman at St. Therese Catholic Church in Appleton. Their marriage was blessed with three children: Carol (David), Catherine (John) and Daniel (Nancy).They were also blessed with five grandchildren: Lauren, Jonathan, Benjamin, Emily and Zachary.

He began his career as a CPA at Arthur Andersen in Milwaukee and later joined Thilmany Pulp and Paper Company in Kaukauna, where he proudly worked for 31 years and retired as assistant treasurer.

In 1963, Don and Agnes were founding members of St. Thomas More Catholic Church. Over the years, they served the parish in many ways, including Don’s tenure on the finance committee and school board. He also contributed to the community as a board member of the Appleton Parks & Recreation Commission.

Don was an avid golfer and well known for teeing off at the crack of dawn at Reid Golf Course. In fact, the Post-Crescent once wrote about his routine in a feature story headlined ‘Early Birdie.’ A true Wisconsin sports fan, he was passionately devoted to the Packers, Badgers and Brewers.

A funeral mass will be celebrated for Donald at 12 PM on Thursday, October 4, 2018, at St. Thomas More Catholic Church, 1810 N. McDonald St., Appleton, WI 54911, by Rev. Jim Lucas. Friends and family may visit at the church from 10:30 AM to the time of mass. Interment will be in St. Joseph Cemetery, Appleton.

A special thank you to Brewster Village for the care and support they provided to Donald and family.

To order memorial trees or send flowers to the family in memory of Donald B. Witeck, please visit our flower store.