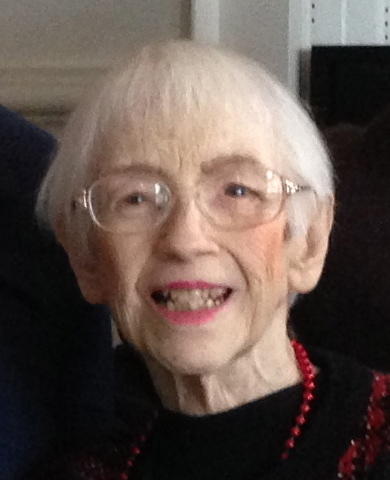 Dolores “Ma Dee” (Bayer) Mutschler, Appleton, died on September 2, 2013, at the age of 85. She was born August 14, 1928 in Appleton to Oscar and Laura (Watson) Bayer and graduated from St. Joseph's School and Appleton High School (now Appleton West) in 1946. She lived briefly in New York City, where she is sure she bumped into her future husband, Ludwig G. Mutschler, who lived in Manhattan at the time. She returned to Appleton and officially met “Lou” several years later. The couple was married on December 19, 1959. They celebrated 30 years of marriage in 1989, while vacationing in Denver. Dolores worked for Kimberly-Clark for 20 years, retiring in January of 1987.

She was preceded in death by Lou in November of 1990; her son Michael in January 2001; her parents; her brother Gerald (Lois) Bayer; and a sister-in-law Jeanne Bayer.

Dolores is survived by her children: Thomas (Gregg Lof) of Boston; William (Lisa) of Denver; and Peter (Cathy) of Appleton; three grandchildren: Alexandra and Bailey of Denver and Jack of Appleton. Dee is also survived by two brothers: Sylvester Bayer and Charles (Joyce) Bayer of Appleton; and a sister-in-law: Charlotte Mutschler of Columbia, South Carolina; as well as several nieces, nephews, cousins and many special friends.

Dolores was ahead of her time; though she didn't drive, she was very independent until her physical health became limiting. She was extremely intelligent, loved to talk and share new ideas, and was always sending cards and letters enclosed with articles or books to consider. Dee was understanding and had a great sense of humor. She loved to travel; NYC was a favorite destination, especially an 80th birthday trip with her children and grandchildren. She was a voracious reader, almost a book a day; a gift of a Kindle from her sons when her eyesight started to fail was a miracle for Dee, a whole new world of discovery at a touch of a button. More than anything, she loved her sons and grandchildren fiercely.

A memorial service will be held Friday, September 13, 2013 at 6:00 p.m. at Brewster Village, 3300 W. Brewster Street in Appleton. The family will receive relatives and friends at Brewster Village on Friday, September 13 from 3:00 p.m. until the time of service. In lieu of flowers, memorial gifts will be directed to charities meaningful to Dee. Online condolences may be offered at wwww.wichmannfuneralhomes.com.

A special thanks goes out to all the staff at Brewster Village for their kindness, company and exceptional care.

To order memorial trees or send flowers to the family in memory of Dolores M. Mutschler, please visit our flower store.