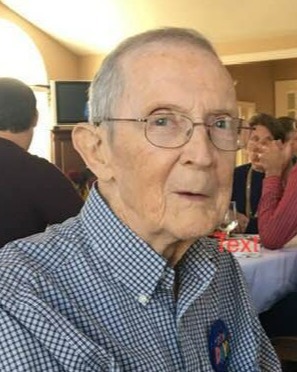 Delmer F. Watson, 93, died peacefully on December 31, 2022.  He was born in New Diggings, Wisconsin on October 27,1929.  He is survived by his wife, Janice Miller Watson and two daughters, Ellen (Tad Neuhaus) and Elizabeth, all of Appleton.

Del grew up in Benton, Wisconsin graduating from Benton High School in 1947.  He attended school for two years in Platteville after joining the Army Reserve as an inactive member.  He was subsequently recalled to serve as a replacement in Korea and served there in the artillery in 1950-51.  On his return, he attended the University of Wisconsin, Madison, earning a degree in 1956.

Del had a happy childhood in a family of three sisters and one brother.  He enjoyed a lot of time along the Fever River swimming and getting into trouble.  All his siblings pre-deceased him.  He left behind many beloved nieces and nephews.

After graduating from the University, he went to work with Farmers Mutual Insurance company.  This later became American Family Insurance Company of today.  He served the company in Madison, WI, Saint Joseph, MO, Omaha, NE, and finally in Denver, CO.

Colorado became home for 41 years with many friends and happy times in the mountains camping and hiking.  The Watsons moved to Appleton in 2018 to be nearer their daughters.

Del was a life-long fan of art. In any city he visited, if there was an art museum, art gallery or art fair, Del would go there first. Over time this instilled a great love and knowledge of art in his daughters.

Services will be held at All Saints Episcopal Church in Appleton, WI, on Saturday, March 18, 2023 at 2:00 p.m., with a reception following at the church.  Donations may be made in his memory to the Wisconsin Parkinson Association, The Denver Art Museum or a charity of your choice.

To order memorial trees or send flowers to the family in memory of Delmer F. Watson, please visit our flower store.