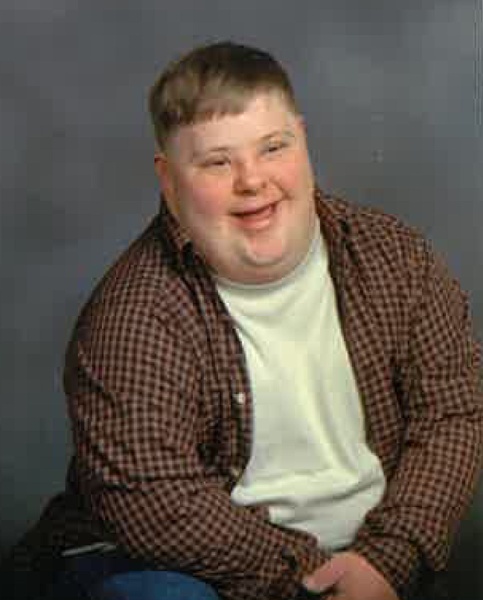 David J. Peters, our beloved brother, age 50, passed away on March 31, 2022, following a courageous battle with cancer. David was born to James and Carol (Kica) Peters on August 22, 1971, in Appleton, WI. David attended Plamann school and graduated from Appleton East High School in 1992. David lived in Appleton his entire life and was an employee at Valley Packaging Industries for 30 years. Most importantly, David was a wonderful and loving son, brother, uncle, and great-uncle.

David was an integral part of his large, loving family. As the ‘baby’ of the family, David tried to keep up with his older sisters and brothers. Early on, his parents involved David in activities at the former Plamann school and then with Special Olympics. During his Special Olympics athletic career, David competed in softball, track, bowling, and his favorite, basketball. David met so many amazing people during this time and was proud of all that he and his teams accomplished. Before his dad’s death in 1999, David had the opportunity to explore much of the country with his parents. More recently, David enjoyed many activities with his siblings and his nieces and nephews who adored their ‘Uncle David.’ David was blessed to have so many people who appreciated his company and wanted to share their lives with him. His favorite things to do with his extended family were going out to eat; bowling; attending sporting events; summer vacations to Star Lake; Packer game pools; and, family celebrations, especially his birthday. He was an avid Packers fan but was known to occasionally cheer for the Dallas Cowboys. He enjoyed video games, movies, card games, and his mom’s spaghetti dinners. David was also a valuable volunteer at St. Joe’s Food Pantry where he volunteered with his mom.

The visitation for David will be held at Sacred Heart Catholic Church at 222 E. Fremont St., Appleton, WI on Friday, April 8th beginning at 10 am with a funeral mass to follow at 12:15 pm. Immediately following the funeral mass, family and friends will travel to St. Mary’s cemetery on Prospect Ave. in Appleton for burial. The burial service will be held for David and for his mother, Carol, who passed away on February 18th. In lieu of flowers, the family asks that you make donations to our local Special Olympics agency, SOAR Fox Cities, located in Appleton.

David was beyond blessed to have his godmothers, and sisters, Jean and Jan, care for him after his mom became ill and during the final stages of his life. We are so grateful for them. We would also like to express our gratitude to David’s longtime doctor, Dr. David Anderla, his oncologist, Dr. Qiaofang Chen, Nurse Julie from ThedaCare Cancer Center, and Joan, his social worker from Outagamie County. We witnessed some true heroes in David’s hospice nurses, Malinda and Jessica. Their care, compassion, and assistance for David and the family made it possible for him to spend his final days in the comfort of his own homes.