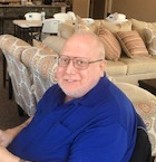 John 3:16. For God so loved the world, that He gave his only son, that whoever believes in Him should not perish but have eternal life. David Leon Klecker, formerly of Farmington, Minnesota, went to his eternal home on Sunday, May 2nd, 2021, at the age of 60. He was the beloved brother of Sandra Klecker, Debra Klecker, Susan (Terry) Linn, James Klecker, Linda (Doug) Bisbee, and Jolene Preston. He was preceded in death by his parents, Leon and Josephine Klecker; his brother and sister-in-law, Tom and Diane Klecker; his brother-in-law Mike Preston; and his nephew, Matthew Bisbee. David is survived by many nieces and nephews and other much loved family.

David was a faithful worker at Northern Tool and Equipment for the last 20 years as a Quality Control Inspector. He enjoyed playing computer games in his spare time which aided in his great problem solving skills. He very much took after his father in that he was a “handyman trivia buff” and was a really good resource for family and friends working on home improvement projects. Despite struggling with multiple health issues all of his life, David had a very  generous and compassionate heart. He was always willing to lend a helping hand to his longtime neighbors in need.  David was dearly loved and will be greatly missed by all who knew him. May his memory be eternal.

A special thank you to ThedaCare At Home, ThedaCare Hospice, and all the loving and compassionate staff at Prairie Home Assisted Living.

A private family celebration of David’s life will take place in July.

To order memorial trees or send flowers to the family in memory of David Leon Klecker, please visit our flower store.