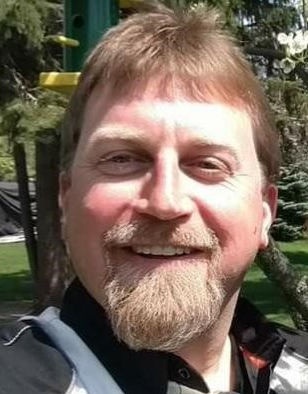 It is with great sadness that we mourn the sudden passing of Daryl John Wolf on Saturday, June 11, 2022, at the age of 50.  Daryl was born January 5, 1972 in Kaukauna, Wisconsin, the 4th child given to DuWayne and Shirley (Dehne) Wolf. He was baptized and confirmed at Trinity Lutheran Church and he attended Trinity Lutheran School. Daryl graduated from Fox Valley Lutheran High School in 1990 and Fox Valley Technical College in 1993 majoring in Machine Tool. He was currently Operations Manager at B&H Pattern in Appleton, and was known throughout the industry for his CAD expertise.  Daryl was proud to have designed parts that would be used by many major corporations.

Daryl wore many hats in his life and was a jack-of-all-trades. He was an expert woodworker and a dedicated musician on both drums and as a self-taught guitar player. He was proud to play with Touch ‘N Go in the 90s and later sat in on drums for area bands.  He raced stock cars for the former CCRA (Calumet County Racing Association) with Wolf Brothers Racing where he took a few checkered flags and was a Rookie of the Year in 2003.

He greatly enjoyed organizing and participating in Harley rides with his biker friends and times around the campfire with a cold one at his place up north. He was a proud member of the Oneida Nation, was an avid Packer fan, loved a good “toe tapper” and was a familiar face in Greenleaf and Dundas establishments. He was also a very proud dad of his United States Air Force daughter.

He was preceded in death by his grandparents, Edgar and Leona Wolf, Mabel Ohlsen and Lester Dehne. He was also surely greeted by his dogs Sheka and Hershey.

A farewell devotion service will be held at 7:00 PM on Thursday, June 16, 2022, at the Fargo Funeral Home, which is located at 400 W. Wisconsin Avenue in Kaukauna.  Friends and relatives are invited to gather at the funeral home on Thursday from 4:00 PM until the time of the service.

Another celebration of Daryl’s life will be held on Sunday, August 28, 2022, beginning at 1:00 PM at Rocky & Tara’s Nut Haus in Dundas, Wisconsin.  Feel free to wear your favorite plaid shirt, Harley or other Daryl-appropriate attire to either event

Much appreciation goes to Daryl’s coworkers, especially Sue, at B&H Pattern for assisting since his recent diagnosis of brain cancer. Thank you for your care of our son and brother. We are forever grateful.

Daryl’s confirmation verse was Matthew 28:20………”and lo, I am with you always, even unto the end of the world.”

Until we meet again, Daryl, we’ll keep some beer in the fridge and when we’re gazing up at the stars, we’ll know you’re there.

To order memorial trees or send flowers to the family in memory of Daryl J. Wolf, please visit our flower store.