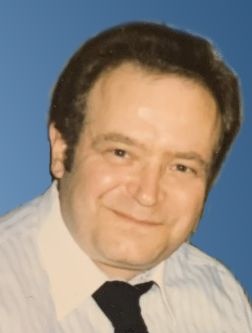 Daniel Lyman Daoust, 79, of Menasha, passed away peacefully at St. Elizabeth Hospital on July 16, 2021, after a long illness. Daniel was born on January 7, 1942, son of the late Lyman and Naomi (DeRosier) Daoust. He graduated in 1959 from J.E. Murphy High School in Hurley, WI, and later attended Northland College in Ashland, WI. Daniel was united in marriage to Faithe Sharpe on June 9, 1962, at St. Therese Parish in Appleton. Sadly, Faithe passed in 2020. Daniel enjoyed his career as a baker, owning Daoust Bakery in New London, and working at several other bakeries including Manderfields in Appleton. He was a proud member of the Baker’s Union, and vice president and recording secretary at Holy Name Parish. He was an animal lover to his special dogs Cocopuff, Dasher, Rufus, Toby and Jack.

Daniel loved to travel having covered thousands of miles including Canada and all but five U.S. states. He was an avid journalist and spent much time investigating ancestry and locating long lost friends. He was a true Packer and Badger fan who also loved basketball. In his younger days, he excelled at waterskiing and enjoyed downhill snow skiing. He was proud of his heritage of being son of the “Pasty King” of Northern, WI and Upper Michigan: Daoust Pasty Shop, Hurley, WI. He was known by his family and friends for his pasties and for playing his guitar.
Daniel is survived by his children: Jody (James) Geenen, Mary (Dave) Fischer, and Steven (Karla) Daoust; granddaughters: Rachel (Kilian) Regan, Ashley Geenen, Amy Geenen, and Lindsey (Austin) Dewey; grandson: Preston Daoust; step-grandson: Luke Fischer; and step-great grandsons: Gabriel and Reuben Fisher. He is further survived by his brother: Joseph Daoust; brother-in-law William Sharpe; sisters-in-law: Randee (Peter) Kessler and Stephanie Sharpe; as well as many nieces, nephews, relatives and friends.

The Funeral Liturgy for Daniel will be held at 11:00 am on July 20, 2021, at ST. THOMAS MORE CATHOLIC CHURCH, 1810 North McDonald St, Appleton. Visitation will be held from 10:00 am until the time of Mass. Memorials to the Edmundite Mission in Selma, AL or St. Labres in Ashland, MT, are appreciated. Online condolence may be expressed at www.wichmannfargo.com.
Daniel’s parting words to his family, “Enjoy life!”

To order memorial trees or send flowers to the family in memory of Daniel L. Daoust, please visit our flower store.