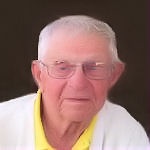 Having lived a long and faith-filled life, Clem Rass fell gently into the arms of his Lord early Saturday morning, June 5.

He was born to the late Clem and Louise (Jeanquart) Rass 104 years ago in the Village of Luxemburg (WI), the oldest of 8 siblings. The Rass family “traveling gene” was a major influence throughout his entire life. Even as a young boy in the late 1920’s, he accompanied his dad, mother, and younger brother on road trips to both the East and West Coasts. Clem left Luxemburg to attend Marquette University, but World War II would interrupt his education. After being discharged from the US Air Force he returned home where, in 1946, he married Madge Rippl, settled in Menasha, and joined Remick Transfer as a bookkeeper, eventually becoming an officer of the company. A source of pride was his attaining a military vehicle driver’s license, which occasionally came in handy when working for a trucking company. Dad fervently believed in continuing education, taking evening classes at UWFV. Always active in his community, Clem sat on numerous boards including St Mary Catholic School as President, Director of Catholic Social Services and he was involved in the Community Chest (predecessor to United Way).

His garage and basement were always filled with projects, many of them destined for the Rass Family cottage (Door County) or the Rass Family logging camp outside Long Lake (WI). Many of these projects were also good excuses for him to get away and enjoy some fishing on Riley Bay or the Popple River while absorbing peace and quiet in the forested 80 acres of the “camp”. While sometimes complaining about being drafted to help with these projects, his children will always be grateful to have been able to participate and obtain lessons learned while working with him on these projects. After retirement, his life did not slow down one-iota·. Well into his 90’s, Dad could be seen attending morning mass at any of the 5 local Catholic parishes. Afterwards, heading to the Y to work-out and later playing 9 holes of golf with his gang of five. Clem & Madge enjoyed riding their bikes; Dad riding to the library to read The Wall Street Journal. Just as important as the exercise to him was the opportunity to socialize with all those who kept the same schedule. He gave much of his time, energy, and passion over many years to visit family, friends, neighbors and former co-workers at their homes, retirement sites, nursing homes and hospitals throughout the Fox Cities and beyond. Travel/exploring was enthusiastically embraced by Clem, whether it was a journey to Florida, California, Minnesota, New York or the UK (to visit his sons), flying around Northeast Wisconsin in a 2 seat Kit Fox plane, cruising/flying the glacial inlets of Alaska and trekking through nearly all US National Parks, he and Mom were always up for a new adventure. Each trip was a different voyage with stories of getting lost in Mexico City walking back to the hotel after Mass. Being “escorted” out of a Beijing market by two very large Chinese guards, one under each arm or upon seeing the faces of his fellow Americans when a platter of “whole” fish was plunked down on the table, calmly pulling out his Swiss knife and proceeded to fillet each one getting rid of the head, tails and other parts thus becoming a hero to all traveling with him. Every trip was plotted out on a large world map that hung in his basement. There was a myriad of black lines radiating out from Menasha with corresponding dates to all parts of the US, Canada, Europe, Scandinavia, Mexico and Asia.

Clem was preceded in death by his wife, Madge (a.k.a. Sport), his adventurous traveling companion of 72 years, and his daughter Paula Michalkiewicz.

A Funeral Mass will be celebrated for Dad at 11 AM on Saturday, June 26, 2021 at St. Mary Catholic Church, 528 2nd St., Menasha, WI. Friends and family may visit at the church from 9:30 AM to the time of the mass. Inurnment will follow in the parish cemetery with Military Honors.

Clem’s family would like to express deep appreciation to Drs. Xio Yao and Nathan Munson. They took superb care of Dad from his initial diagnosis of Lymphoma at age 93, through multiple chemotherapy & radiation treatments to his recovery & remission. It is a testament to the compassion and level of care he received, the power of prayer and his sheer determination to go on that we were all able to enjoy 11 additional years with him. Profound thank you to Jodi LaMarche who stepped in 10 years ago to support our parents in their efforts to stay in their own home and upon their move to Island Shores. Whole-hearted thank you to the amazing staff at Island Shores (Doty Island) for making Dad’s (and Mom’s) final years with us comfortable and enjoyable and to the wonderful ThedaCare Hospice team; especially Mary, Tiffany and Jeannie for your compassionate care of Dad. A warm thank you to Tom and Paula Smith and Amie Brantmeier, Clem and Madge’s neighbors who for many years stopped over to visit, shared delicious food and celebrated many “happy hours”. Thank you to so many of Dad’s friends who always made time to visit him. Their visits were uplifting and renewing to his spirit. We will miss Clem so very much, but we know that he is now enjoying, once again, the company of his wife & daughter and all those family and friends he so generously shared his life with.

In lieu of flowers, donations be made in Clem’s memory to Catholic Charities of the Diocese of Green Bay, Leaven Community Resource Center, 1475 Opportunity Way, Menasha, WI 54952, (920)734-2601 by visiting https://mkjmarketing.makemydonation.org/donate/391572168.

Please leave a special message or condolences for Clem’s family below.

To order memorial trees or send flowers to the family in memory of Clement Joseph Rass Jr., please visit our flower store.