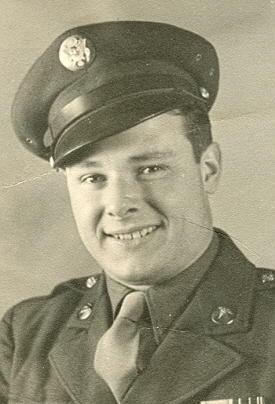 Age 90, passed away, surrounded by his loving family, at Appleton Medical Center on Wednesday, November 4, 2009. He was born in Menasha on February 8, 1919, the son of the late Antone H. and Hannah (Hopfensperger) Marx. He graduated from Short Course in Madison in 1940. In February, 1942, Clarence entered the United States Army, served in Europe, and was discharged in 1945. He served as a medic with the 8th and 9th Air Corp. in England, France and Germany. He earned the rank of Corporal. On June 28, 1945 he married his wife of 64 years, Dorothy Mischler, at St. Francis Catholic Church, Hollandtown. After being discharged, he started farming in 1946. He served as Director of D. H. I. A. and Director of the 4-H Leaders Association. He was a 4-H leader for 35 years as a main leader and project leader in tractor and woodworking. Clarence was on the Advisory Board of the F&M Prime Time Club. He won trophies for High Herd, bowling and community service. He was a member of the Freedom V.F.W. Post #7692 and the Outagamie Retired Educators Association. He enjoyed making crafts, fishing, bean bagging and bowling.

The funeral liturgy will be at 11:00 a.m. on Saturday, November 7, 2009 at HOLY CROSS CATHOLIC CHURCH, 309 Desnoyer St., Kaukauna with Fr. Tom Pomeroy officiating. Friends will be received at the funeral home on Friday from 4:00 p.m. until 8:00 p.m. and at the church on Saturday from 10:00 a.m. until the time of the mass. Burial will be in Holy Cross Cemetery, Kaukauna.
The family extends a special thank you to the staff at Parkside Care Center, especially Kelly, Carol and Olga; staff and Hospice at Appleton Medical Center, especially Dr. John Swanson and Dr. Timothy Culligan; and a special thank you to Jerry Fischer for his many visits and help to the family.

In lieu of flowers, a memorial fund in Clarence's name is being established.

To order memorial trees or send flowers to the family in memory of Clarence H. Marx, please visit our flower store.